Save the Vaquita: On the Brink of Extinction

The vaquita is on the brink of extinction, as there are currently only a small number of survivors that form the basis of any future recovery. 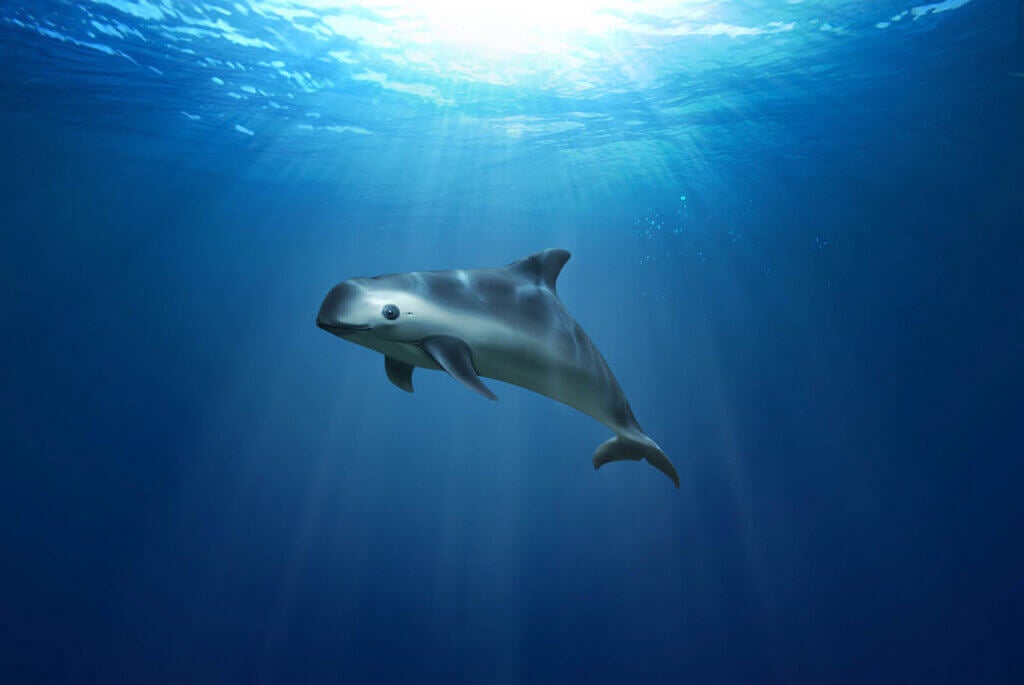 The vaquita (Phocoena sinus) is one of six species of toothed whales (porpoises) that make up the seal family. They are the smallest group of cetaceans, and, as adults, they don’t exceed 150 centimeters (5 feet) and 50 kilograms (110 lb). Unfortunately, the vaquita is on the brink of extinction. Can we save the vaquita?

In terms of habitat, this species has an extremely restricted range. In fact, it lives exclusively in the reserve of the upper Gulf of California, in Mexico. Seasonally, the waters of this gulf vary widely in temperature: from 57 to 97 degrees Fahrenheit from January to August.

Thus, the vaquita stands out for its important adaptation to tolerate major annual temperature fluctuations. Most of the vaquita are restricted to living in cold waters, below 68 degrees Fahrenheit.

How to identify the vaquita

A characteristic feature of this species is the protruding appearance of their lips. In addition, the upper body is dark gray, while the belly is almost white or light gray. What’s more, its fins are proportionally larger than in other porpoises.

As for its facial profiles, it’s blunt in many respects. The vaquita resembles the harbor porpoise Phocoena phocoena, with the exception that the vaquita is thinner.

Experts explain this in terms of its warmer habitat. The animal’s thin body increases the surface/volume ratio, favoring heat dissipation. In this species, experts have also used the same argument to explain the existence of larger appendages.

The Gulf of California is home to the highly coveted totoaba fish (Totoaba macdonaldi). Unfortunately, the vaquita and the totoaba are similar in size and shape, so it’s easy to confuse the two. In addition, both species are on the brink of extinction.

The behavior of vaquita

This enigmatic species is very shy and it’s uncommon to see it jump above the sea’s surface like dolphins. That’s because it simply emerges for a few seconds to take a breath before going back underwater. The vaquita lives at a shallow depth, less than 50 meters (160 feet)

As for its feeding habits, its diet consists of a variety of teleost fish and squid, which swim near the surface of the water. Although some studies report it as solitary, some have observed vaquitas in small groups of up to 8-10 individuals.

Like many other porpoises, the vaquita uses sonar as a means of communication and navigation through its habitat.

The vaquita is on the brink of extinction

According to the International Union for Conservation of Nature (IUCN) registry, this species is “critically endangered” (CR).

In fact, the vaquita is the cetacean at greatest risk. In 2017, experts counted only 18 adult individuals, so seeing a live specimen of this species is almost impossible.

Fishing nets intended for other marine animals often catch vaquita. For example, in gillnets for shrimp or totoaba. In fact, experts have blamed mortality in nets as the most serious and immediate threat to the survival of this animal.

Other potential threats include inbreeding depression, exposure to pesticides, and also ecological changes as a result of reduced Colorado River flow.

What is known about vaquita reproduction?

Vaquita reproduction is synchronous, with births occurring from late February to early April. In addition, sexual maturity is believed to be reached between the ages of three and six years.

Scientists also know that this species isn’t monogamous, as males mate with as many females as possible. In addition, females have only one offspring per pregnancy and lactation lasts for less than a year. What’s more, vaquita can have reproductive cycles of two or more years.

Can we save the vaquita?

A species’ reproductive capacity strongly influences the ability of a small population to recover after a severe decline.

Unfortunately, experts know very little about many key reproductive parameters of this species. In any case, there’s still a chance to save the vaquita as long as enough specimens remain alive.

The Amazon Pink River Dolphin: A Fascinating Creature
The Amazon pink river dolphin is a fascinating creature that has inspired many myths, along with being one of the few kinds of dolphin that lives in rivers. Read more »
Link copied!
Interesting Articles
Mammals
Types and Characteristics of Asian Elephants