Sperm Whales - The Giants of the Ocean

Sperm whales are huge and can weigh as much as 200 tons. You may not know it but it's the largest animal on the planet. 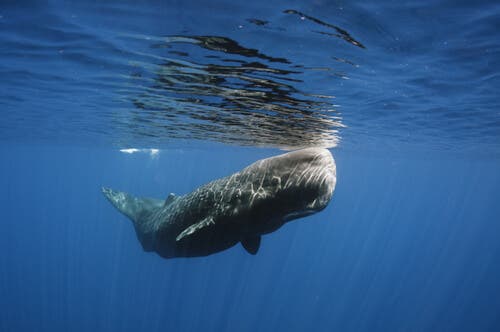 Sperm whales are huge and the size of their brain exceeds that of any other creature on Earth. These animals are capable of descending to a depth of about 3280 feet and can also hold their breath for up to 90 minutes. The sperm whale is one of the most fascinating creatures in the deep ocean, no doubt.

The scientific name of the sperm whale is Physeter macrocephalus, and they’re mammals of the cetacean order. In fact, they’re the largest creatures in this order and an adult male can reach a length of about 85 feet and weigh around 125000 pounds.

In addition, even at birth, the sperm whale is already 13 feet long and weighs about 2200 pounds. Their only predator is the killer whale, whose attacks are usually lethal.

The sperm whale is easily recognizable by its huge head and grayish color. Their enormous size is due to the fact that the skulls of cetaceans hide a fluid called spermaceti — its function is still open for debate. At first, its color and consistency led scientists to believe it was sperm (hence the animal’s name) but they were wrong.

One of the most accepted theories has to do with cetacean buoyancy. Due to its consistency, low temperatures solidify the liquid, which can weigh up to 88 pounds.

It finds it easier to find food at just over 3000 feet deep. Actually, the sperm whale can ingest live giant squid thanks to the capacity of its four stomachs.

It’s usual for sperm whales to move in groups of about 15 or 20 specimens. Females travel with their young and are more sedentary, and males move from group to group. In regard to their reproduction, their gestation period ranges from 14 to 16 months and the mothers can continue to breastfeed for over three years.

When the mating season arrives, the males move towards the equator to reproduce. Sperm whales, therefore, spend most of their lives in two different groups: first, in nurseries that females improvise with their young. Later, males form groups of singles, who dedicate themselves to migrating to hunt and reproduce.

A particular sense of direction

The sperm whale’s fascinating habits include an intricate system of sound waves. These cetaceans emit a sort of click, which they use both for communication and for echolocation. This is because the emission of audio signals in the water from other bodies and structures reflect and allow you to know their topography.

Recalling the aforementioned spermaceti, this viscous fluid allows them to direct and project the produced waves. Researchers also believe it might play an important role in their hunting habits as the high frequencies at which they emit them can stun their prey.

The sperm whale was the mainstay of the whaling industry for the value of its oil and the so-called gray amber, a flammable and waxy discharge, during the 18th and 19th centuries.

The animal’s intestines secrete it to facilitate the transit of difficult-to-digest foods, such as squid. Mainly, this substance was used as a fixative in perfumery, although this industry now uses synthetic compounds.

Despite the heavy blow they suffered from whaling, it isn’t considered an endangered species. However, the International Union for Conservation of Nature (IUCN) considers it vulnerable.

The sperm whale also has a place in literature. Who can forget Moby Dick’s mythical albino specimen! In Herman Melville’s novel, a whaler spends his days chasing the sperm whale that ripped his leg off because he’s insanely obsessed.

Apparently, there was an actual albino specimen named Mocha Dick. It lived around Mocha Island, in Chile. The fierce struggles between this aggressive sperm whale and its hunters also appeared in a New York publication. In 1851, Herman Melville immortalized the figure of Moby Dick and thus the figure of this fascinating whale.

Whale Song
Whale song is one of the most fascinating mechanisms found in nature. This article will explain all about this mysterious form of communication. Read more »
Link copied!
Interesting Articles
Mammals
European Mink: Critically Endangered