One of the main characteristics of this species is its strong loyalty and solidarity with its own. 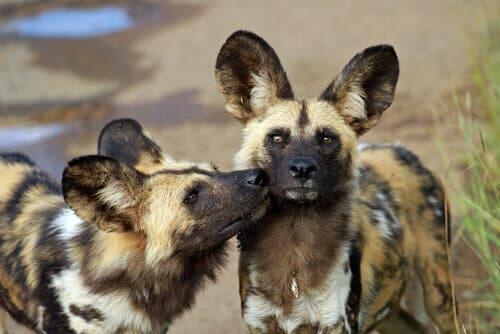 Also known as the ‘painted wolf’, the African wild dog is the only living representative of its kind. This predator, which shares certain characteristics with both hyenas and wolves, is one of the more unknown African species. Their way of life, however, is somewhat peculiar.

Origins of the African wild dog

The first scientific description of the African wild dog is attributed to zoologist Coenraad Jacob Temminck, although he mistakenly identified them as a breed of hyena. In 1827, biologist Joshua Brookes named the animal the tricolor Lycaon and classed them as Canidae.

This peculiar name comes from the Greek Lykaios, which means ‘wolf-like’. There are still no conclusive studies that investigate the taxonomy and evolution of this species, which has been characterized by its scarcity for centuries. They’re mainly found in sub-Saharan Africa.

For scientists, the fact that they have four toes on each foot, where dogs usually have five, was their first indication that they were looking at a new species. The color pattern of their coat is also unique and inherent to this species.

The African wild dog weighs between 37 and 77 pounds, and has a life expectancy of about 11 years. They live in cooperative groups of 6 to 20 individuals, dominated by a reproductive monogamous couple. The rearing they practice is communal, meaning the puppies remain under the charge of all the members of the group.

One of the main characteristics of this species is its strong loyalty and solidarity with its own. As well as carrying out communal rearing, they also share hunting and care for the sick and elderly. Their days are filled with a whole series of social interactions, which keep the group cohesive.

As for their hunting habits, we can say that their favorite prey is the antelope, and they hunt in formidable groups of up to 20 individuals.

A species in danger of extinction

The International Union for the Conservation of Nature (IUCN) lists the African wild dog as an endangered species. They’ve been on the organization’s ‘Red List’ since 1994.

Originally, the African wild dog was found throughout sub-Saharan Africa, from the desert to the mountains. Currently, the species has completely disappeared in North and West Africa, and is depleting in the north-east and south.

We can now find them in Botswana, Zimbabwe, Namibia, and Zambia, along with Tanzania and Mozambique. One thing that has drastically changed because of the reduction in the population is their hunting habits.

Both habitat loss and hunting have caused them to attack larger prey and thus the number of individuals joining the hunt has increased. Sometimes they attack cattle, which has left them unpopular among natives.

The program created by IUCN, the Cheetah and African Wild Dog Conservation Program, wants an African intergovernmental collaboration to recover both species. Given the population dispersion of both species, this program seeks to implement coordinated conservation strategies in North, South, and East Africa.

Unfortunately, the African wild dog is not only at risk of disappearing because of the dispersion and scarcity of its populations. Their extinction in the Serengeti-Mara area in 1991 was due to an outbreak of rabies which no herds recovered from. Canine distemper also eliminated at least one whole herd in Botswana.

The main problem in dealing with diseases of this species is the increase in domestic dogs in areas close to their habitat. They pose a deadly danger to the African wild dog, and vaccination strategies are being considered.

Genetic Divergence Between Dogs and Wolves
While most of you probably know that dogs and wolves are related, you probably don't know that dogs evolved through a process known as genetic divergence. Read more »
Link copied!
Interesting Articles
Mammals
Types and Characteristics of Asian Elephants