The Effects of Climate Change on the Cantabrian Brown Bear

The changes rising global temperatures cause make animals have to adapt quickly. In this article, discover the effects of climate change on the Cantabrian brown bear. 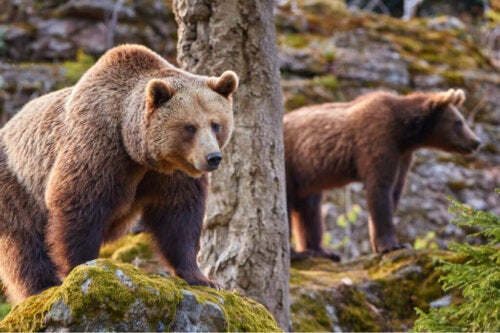 Climate change is wreaking havoc around the world. In the Cantabrian Mountains (Spain), increased temperatures have wrought their effects on the hibernation behavior of the Cantabrian brown bear (Ursus arctos arctos) and also on their feeding.

These effects could have very serious consequences on the preservation of the species. This species is endangered, and human contact isn’t helping to improve the situation. Also, habitat destruction and land use changes are making it more difficult for the species to survive. The effects of climate change are added to all these factors.

How does climate change affect the Cantabrian brown bear?

In the 90s, the Brown Bear Foundation began to study the winter activity of the species. They shouldn’t carry out any activity this season of the year, as bears usually hibernate during the winter.

But the researchers discovered that this wasn’t the case. They found bear tracks in the snow, so there was no doubt that they wandered outside their shelters during the winter. Furthermore, they were seen feeding in beech forests and oak groves. This scientific evidence demonstrated that some Cantabrian brown bears didn’t hibernate.

Since that time, the environmental temperature, a factor that causes bears to hibernate, has increased. In fact, the winter of 2020 was the warmest of the entire 21st century in Spain.

Hibernation is the most precise adaptation of all endothermic species. These are species that regulate their body temperature through internal mechanisms. This adaptation allows animals to survive when food is scarce and the weather is very adverse.

For brown bears, hibernation isn’t just a time to survive a lack of food and save energy. During this time, the bears give birth to their young in the warmth of their shelter. They must come out in late spring.

Between 1995 and 2018, experts saw that the bears and their cubs left their burrows or dens before they should. The trend was clear: in years where the average temperatures were higher, the bears came out of their burrows early.

The researchers at the Brown Bear Foundation no longer deem surprising the fact that the Cantabrian brown bear no longer hibernates, and much less after such warm winters. The consequences of these events can be devastating for bear populations in Spain, but also in the rest of the world.

The dilemma of lack of food

It’s clear that there’s a tangible relationship between rising temperatures and the early departure of bears and cubs from their dens or burrows. Unfortunately, these situations can have serious repercussions on the reproduction of brown bears.

Bears must come out of their burrows when food is available. If they come out early due to a rise in temperature, there still won’t be enough food. This could cause a high mortality among the cubs, and changes in the population dynamics of this species.

Other consequences for the preservation of the Cantabrian brown bear

As bears hibernate during the winter, the mountains where they live become hot spots for other activities. Some of them are mountain sports, nature tourism, and hunting.

If bears are out and about in the mountains during the winter, these human activities will have to be suspended. This is a reality that those who are in charge of regulating the use of bear land must take into account.

According to Guillermo Palomero, president of the Brown Bear Foundation, this species urgently requires a strategic plan that will help mitigate the consequences of climate change. The purpose of this plan is to reduce the consequences and help the bears adapt to this situation that’s a reality today.

The Effects of Climate Change and Plastic Pollution on Seabirds
Climate change threatens all living beings. Unfortunately, seabirds are more affected than most by climate change and plastic pollution. Read more »
Link copied!
Interesting Articles
Mammals
What Are the Differences Between Jaguars and Leopards?