Instead of hibernating like other bear species do, this animal lives in a drowsy state in winter. This is only thanks to the fat it stores up in autumn; it can eat up to 20,000 calories a day. 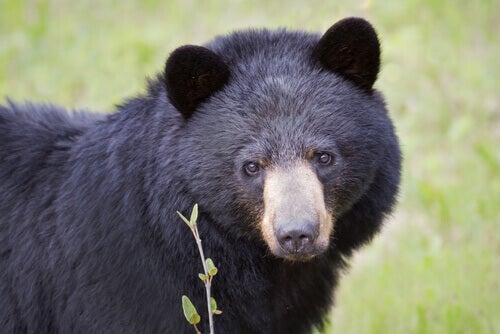 Even though when we think about bears that live in North America we first think of the grizzly, the truth is that this isn’t the most common bear in that country. This region’s ‘landlord’ is the American black bear. In this article, we’ll tell you everything you need to know about this imposing animal.

This carnivorous mammal is the most common in North America and can be found from Canada and Alaska down to Mexico. In addition, it prefers to live in forests and mountains, where it finds good food and hides in caves and trees.

As its name suggests, the black bear has dark fur on most of its body, except for the muzzle, which is brown or reddish. Some specimens may have brown, cinnamon, or chocolate-colored fur, especially those living in the western United States.

Populations of up to 500 individuals can be found in several national parks such as Yosemite, Yellowstone, and the Great Smoky Mountains.

Every year, the American black bear molts its fur and its thick skin protects it from insect bites. It can measure up to 6 feet long and weigh an average of 330 pounds, although females are usually smaller and thinner than males.

Its eyes are small and its vision isn’t very good. However, it can distinguish colors, while its sense of smell and hearing are well-developed. Its long snout allows it to find food among trees, leaves, and tree branches.

Unlike other bears, the American black bear doesn’t ‘strictly’ hibernate, but remains in a state of drowsiness throughout the winter. This is possible thanks to all the fat it has accumulated in autumn. Moreover, it can ingest up to 20,000 calories and several liters of water per day before settling down in its cave!

When the cold months are over, it’ll head for the valleys and mid-altitudes to access the light and warmth of the sun. As the summer progresses, it chooses forests to protect itself from the high temperatures.

As for its diet, it’s an omnivorous mammal, although it mainly eats vegetables, berries, acorns, grasses, fruits, and herbs. It also eats ants, termites, bees, and wasps, which it detects and captures with its long snout. This bear is a big honey lover and, during the summer, it approaches the rivers to hunt and catch salmon while they try to jump up the river.

This bear is a great swimmer and can climb trees with impressive agility. As a result, it will swiftly escape from any danger, mainly from being hunted by humans. In addition, it has the ability to walk on its two hind legs or to sit on a rock, log, or a stone to rest.

The black bear is solitary most of the year, except for sporadic encounters in areas with plenty of food. They also group during the rutting and breeding season, and, of course, when the mother takes care of the cubs (the male doesn’t participate in this task).

Mating usually takes place between May and June, and the female bear’s gestation lasts about seven months. However, it doesn’t begin immediately after copulation. Females perform delayed implantation of the egg so that births occur in the fall.

Each litter may consist of one or two pups, which are born hairless, blind, and weigh about 350 grams (12 oz). The mother suckles them in a sitting position for eight months and, from then on, they leave the den to learn to hunt. They’ll also need to find a good den and escape from predators (including wolves, pumas, and brown bears).

The offspring leave the mother after a year and a half, or once they have ‘passed’ all the maternal lessons. Their survival will surely depend on this.

What do you think of this interesting animal? Did you already know some of these facts about it? We hope you enjoyed learning more!

Meet the European Brown Bear
The European brown bear is one of the most “famous” among ursids, as it lives in the forests and tundra of the entire continent. Keep reading. Read more »
Link copied!
Interesting Articles
Mammals
What Are the Differences Between Jaguars and Leopards?