How Do Animals Protect Themselves from the Cold?

Some species are able to mitigate or avoid low temperatures by various means: thanks to their physical traits, by hibernating, or getting to the point of complete freezing and surviving it. 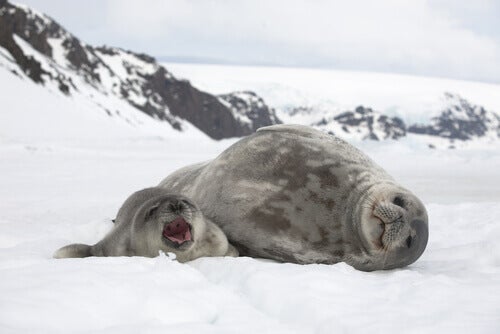 People just wear more clothes, drink hot tea, or turn on the heat, but how do animals protect themselves from the cold? In this article we’ll tell you about the most impressive techniques and adaptations.

How do animals protect themselves from the cold?

Some choose to sleep soundly, others to migrate, and there are others that accumulate body fat. These are some of the most interesting techniques in nature. Do you want to know how animals protect themselves from the cold?

Some animals that live in cold regions near the poles have a very thick coat, which is even denser in the winter. Thanks to this fur, they can protect themselves from low temperatures.

In some cases, the fur even changes color and becomes white or lighter in order to blend in with the snow. The gray wolf, the muskox, and the hare are three examples in this case.

Other species that protect themselves from the cold by increasing the amount of body fat, which is an excellent insulator that keeps vital organs warm and prevents water from entering the body. Depending on the species, this layer of fat can be between 3 and 30 cm (1 to 12 in). Some examples are walruses, seals, and polar bears.

Certain amphibians —such as the wood frogs that live between the United States and the Arctic Circle— have the ability to freeze in cold weather. This is because they have certain chemicals, such as urea and glucose, which protect cells from damage.

Others, like the Siberian salamander, produce a kind of antifreeze that lowers the body temperature in relation to how cold the water is. In this way, it survives the winter, and then returns to its natural state when spring begins.

When we ask ourselves how animals protect themselves from the cold, hibernation is the first idea that comes to mind. By hibernating, the organism reduces its vital functions to a minimum, so it doesn’t waste energy, nor require food and water. This means that both heartbeat and breathing are almost imperceptible.

Likewise, if for some reason they must wake up, they do it in a few minutes. Some animals that hibernate are the koala, the platypus, and the porcupine. The time they remain in this state depends on the species and the climatic conditions.

Another type of “softer” hibernation, so to speak, is that of bears, raccoons and skunks. These preserve their body temperature, but lower their heart rate. In any case, they choose caves, nests or underground shelters to spend the winter.

4. Body shape helps some animals protect themselves from the cold

Some animals that live in very cold areas have a special “shape” that allows them to keep warm. A clear example is the Arctic hare, which has short legs, short ears —compared to other species in the family— and a round body. Another case is that of the polar bear, which has small ears, head and tail to prevent warmth loss.

We can also talk about the flamingos, who have long legs and an exceptional circulatory system: the blood that passes through the extremities goes up to the body and gets warm. It’s as if they had a built-in heating system.

And finally, we can’t forget about the deer or ungulates that live in the Nordic forests all over the world. Deer have long legs that allow them to walk in the snow, and when sinking they prevent the body from touching the cold white layer that covers the ground.

It’s not really a technique employed by animals to protect themselves from the cold, but rather to escape it. But, of course, we must add it to this list, as it allows certain species to survive the coming of winter.

Birds are the typical example of migration. They fly in search of warmer places where food abounds. Swallows, cranes, turtledoves and the lesser scaup are some examples. When the cold season is over in their home habitat, they simply return.

Animals that Adapted to Extreme Cold
For some animals, low temperatures and snow are part of their normal lives. Up next, we'll tell you all about animals that adapted to extreme cold weather. Read more »
Link copied!
Interesting Articles
Invertebrates
The Life of the Snail - Carrying Its House on Its Back