White stork migration has changed over time. For years, these birds stayed in Europe for the winter. Let's take a look at the causes of these changes. 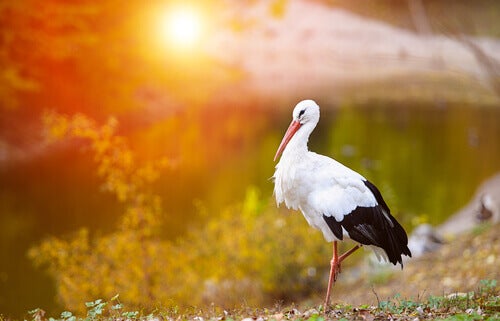 The migration of the white stork (Ciconia ciconia) has changed over time. For example, most of them flew thousands of miles each year after breeding. During white stork migration, these birds spent almost a month crossing half of Europe, the Strait of Gibraltar, and the Sahara desert.

If these birds survived this difficult journey, they would spend the winter in sub-Saharan Africa countries, such as Mali, Niger, or Chad. They stayed here from September until the beginning of February and then returned to Europe.

Regarding this migration, there’s a Spanish saying which says that “You will see storks on Saint Blaise day,” which is February 3rd.

However, not all birds completed this journey. This journey was very difficult and long, and many specimens perished during migration. To avoid crossing the Mediterranean, where the warm updrafts that storks use to maintain long-lasting flight don’t form, storks followed two migration routes:

As a result of the last route, there are many storks in Spain. However, for decades, white stork migration patterns have changed. We’ll explain how below.

For decades, many experts have observed that white stork migration has changed. Many spend the winter in their breeding areas.

This is due in part to the increase in temperatures that causes more mild winters on the peninsular. Also, storks now are able to find food throughout the year due to the presence of landfills.

There are also many lagoons and wet areas on the Peninsula where they can spend the winter and find food. For example, there are the Tablas de Daimiel in Ciudad Real or the Laguna del Campillo in Rivas Vaciamadrid.

However, this doesn’t mean that white storks don’t migrate at all. According to an SEO/BirdLife study, many storks nest in rural areas in Spain. Then, when winter arrives, they move to the outskirts of cities, such as Madrid. There, they find food in the Valdemingómez landfill, which is one of the largest in Europe.

This study was verified by radio transmitters that researchers placed on a couple of storks, Goyo and Enara. These birds migrated in August, heading south from Madrid from the mountains.

This change in their migratory habits seems positive for the survival of the species. By saving themselves from such a long, dangerous journey, more and more storks survive. Also, they have continuous availability of food, which helps with survival.

Another interesting aspect of the SEO/BirdLife study is the difference between adult storks and young storks. These researchers found that young storks continue to migrate. They make the dangerous journey to Africa, while adults remain in Europe during the winter.

Moreover, according to the same study, many birds from colder parts of Europe migrate to Spain to spend the winter.

The Spanish Ornithological Society, in collaboration with other European organizations, has spent years studying the white stork migration. They recently published a detailed study where they included data from GPS radio transmitters on migratory storks for the first time. The results were varied:

In conclusion, the migratory behavior of the stork and this change is crucial. In fact, it likely predicts a general change for many migratory birds.

However, while it seems that their lack of migration has a positive effect on their survival, it remains to be seen how climate change will affect these birds.

6 Fascinating Migratory Birds
Animal migrations are one of the most fascinating things in nature. In particular, migratory birds stand out for the tremendous distances that they travel. Read more »