Animal Migration: When Does It Happen And Why?

Animal migration is a truly marvellous phenomenon. Find out more in this article! 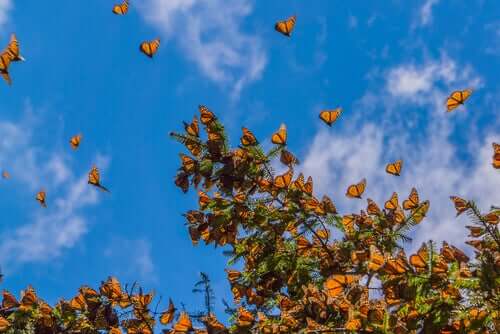 As the seasons change, flocks of birds will cross the sky and marine animals will swim many miles towards warmer waters to reproduce. Animal migration is truly a wonderful sight, and today we want to tell you more about it.

What is animal migration?

Animal migration is essentially when a species of animal moves from one habitat to another. They can be on land, in the sea or in the air! If the movement involves a lot of animals, it’s called an invasion or emigration.

All examples of animal migration involve traveling for several days or even weeks. Small animals like amphibians will take advantage of water currents, whilst birds will make use of the trade winds or rising air.

There can be a number of reasons for this phenomenon. These include staying away from extreme heat or cold, finding more suitable breeding grounds, escaping predators, or simply to find food.

But how animals manage to know where they’re going is still a mystery to us. Some may use the sun or stars as a guide, and there are some theories that suggest that they use the earth’s magnetic field. There are even some animals that simply use their sense of smell.

The most interesting migrations

Many different species of birds, invertebrates, mammals, amphibians, fish, and reptiles migrate at some point in their lives. However, below, we’ve listed some of the most interesting examples:

These animals are the kings of migration. There are two species that migrate a lot throughout the course of their long lives. One of them is the Loggerhead Sea Turtle, which is born on the coasts of Japan and swims across the Pacific Ocean to Mexico in order to feed. They then return to their homeland to mate and lay their eggs. This means that they can travel over 8,000 miles in a single year.

The other species is the Leatherback Turtle, which is born in the Caribbean and then travels along the North American coast to feed on jellyfish. If this is unsuccessful, they will then cross the Atlantic to Africa, traveling almost 10,000 miles.

These are the only sea eagles in North America, and each winter they flock together on the branches of fir and poplar trees in the middle of Vancouver, Canada. They feed on salmon as they make their journey along the region’s icy rivers. In a single week, you could see more than 1,500 bald eagles in the area.

When it comes to marine animals, this mammal makes the longest journey. The Southern Right Whale makes its journey to feed and reproduce. For the latter, they choose the Valdés Peninsula in Argentina, where they arrive in September and October. They then leave the area, though scientists still don’t know which route they follow. They believe that they skirt the coast of South America to reach the warmer coasts of the Caribbean.

Around 1 million antelopes cross large stretches of land between Tanzania and Kenya in search of fresh grassland. This is not really a “normal” animal migration, but they travel in a circle of over 1,600 miles each year to get food.

In many cases, they’re joined by zebras, moose, and gazelles. Of course, they are also closely followed by predators such as crocodiles, leopards, or lions, ready to attack at the earliest opportunity.

This is the most “popular” species due to its orange colors, but it’s also one of the most amazing migrating species. Each October, millions of them arrive in the Pacific Grove area of California to nest before winter. They then travel to the forests of Monterey pine and eucalyptus trees. It’s a truly wonderful show that almost always takes place at midday.

Breeding Butterflies: Basic Tips and Advice
There are many butterfly enthusiasts out there who enjoy breeding and keeping butterflies at home. Take a look at our basic advice for breeding butterflies.  Read more »
Link copied!
Interesting Articles
Mammals
The Puma Is The Great American Predator