All About the Conservation of the Black Stork

The black stork is an emblematic bird and is not as well known as the common white stork. If you want to learn more about this bird and its conservation, don't miss today's article. 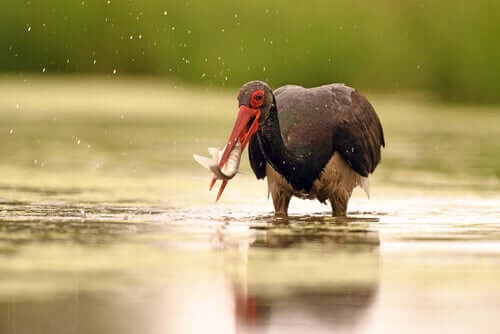 White storks are one of the most well-known birds in our country given the beliefs and stories that surround them. When it comes to the black stork, the situation is quite different. While black storks were probably just as abundant as white storks in the past, people are much less aware of their existence and know very little about them. This is because they are much shyer than white storks and tend to stay away from human populations.

Are these two storks really that different?

Storks belong to the Ciconidae family, which consists of 17 different species of birds. Among these, the Ciconia genus stands out especially. And, within this group, we find the Iberian storks:

Both of these storks migrate to the Iberian Peninsula to reproduce every year. But besides the genetic closeness between both species, it’s amazing to observe how they differ when it comes to their behavior. While the white stork is anthropogenic, black storks are shy… always seeking to stay in the region’s mountains, far from humans.

Also, in regards to their number and distribution, the differences are extraordinary. While white storks are abundant, their black cousins, unfortunately, find themselves on the list of endangered species. For all of these reasons, it’s important for conservationists to come up with ideas to keep these beautiful waterbirds around.

Characteristics of the black stork

The characteristics that define these timid waterbirds are the following:

These birds live in the southwestern region of Spain, with the main population occupying the shores of the Tajo river. Experts estimate that there are about 300 to 350 reproductive couples in the country. In Europe, as a trans-Saharan migratory bird, populations exist especially in the east, where they are relatively abundant.

The habitat of black storks

The choice to settle in one area or another depends on several different factors. These include the availability of materials for building their nests and the proximity of bodies of fresh water. And, as we mentioned before, these animals prefer regions that are free of human beings.

Black storks are eminently a forest species. Therefore, they choose mature forests near the shores of rivers and lakes in order to build their nests in large trees.

The peninsular black stork is unique in that, if necessary, it can build its nest in rocky areas, due to deforestation.

The conservation of the black stork

All evidence indicates that the area of distribution, as well as the number of reproductive couples, has been decreasing over time. The causes may be:

The measures that are underway to protect and increase black stork populations involve developing a good rehabilitation plan, including:

The Shoebill: Behavior and Habitat
The shoebill, also known as whalehead is an incredible bird of prehistoric appearance. It's endemic to the African continent. Read more »
Link copied!
Interesting Articles
Birds
Discover 5 Different Types of Owls