For any visitor to the Serengeti, the wildlife spectacle of the migration offers a huge enhancement to what is already an overwhelming sight. Many of the lodges and safari camps are located in great positions for the arrival of the migration in their area 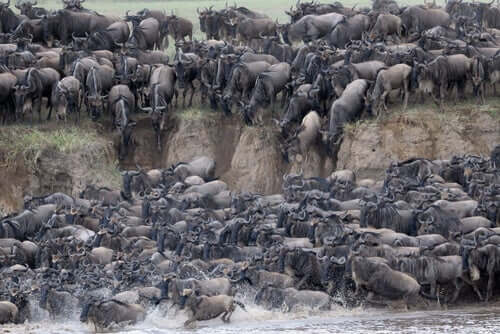 The end of the rainy season in the Serengeti National Park marks the beginning of one of nature’s greatest spectacles. We’re talking about the ‘Great Migration’. In this race against the dry season, more than two million herbivores fight for their survival. Follow along and learn more about this fantastic natural phenomenon!

To understand the importance of this colossal migration, we must bear in mind that this phenomenon is part of the functioning of an entire ecosystem. In this case, the Serengeti’s ecosystem.

As such, the Serengeti is a geographical area located in northern Tanzania that extends to southwestern Kenya. With an area of 12,000 square miles, it’s one of the most biodiverse enclaves on the African continent, with 70 species of large mammals and 500 species of birds inhabiting it.

With the beginning of the British colonization in the first decade of the twentieth century, however, hunting greatly diminished the mammalian population, especially that of lions.

Due to this situation, the British government decided to create the first partial reserve of the area in 1921. However, it wasn’t until 1951 that the protected territory was expanded and the area was declared a national park.

Today, the Serengeti National Park has 5,700 square miles that provide protection for numerous endangered species. Similar in size to a small country, it’s one of the largest parks in Africa and has been considered a World Heritage Site since 1981.

The ‘Great Migration’: a struggle for survival

With the arrival of the month of May, hundreds of thousands of gazelles and zebras and more than a million wildebeest embark on a journey of more than 2,000 miles in search of pastures and water sources. In addition, around 5% of the wildebeest population won’t reach its destination, mainly because of predators.

These large herds start in the southeast, from the so-called ‘infinite plain’, to pass through the Maswa reserve as well as the Grumeti River. Here, a large number of animals are killed by crocodile attacks. The herds also pass through the Ikarongo reserve and the Masai Mara. By the end of November, this circular migration returns to its original position in the Serengeti National Park.

Considered one of Africa’s Seven Natural Wonders, the environmental impact of the Serengeti’s ‘Great Migration’ is overwhelming. Thus, during this migration period alone, 4,000 tons of grass will be consumed a day and 250,000 animal births will occur.

The circle of life

There is neither a start nor finish to their journey. It’s merely a relentless sequence of life and death where the only beginning is the moment of birth and the only ending is death. To say the least, the latter can come only too easily in the migration process.

Even though these migrations take place during the dry season, there’s no specific starting point for the animal groups. In these extensive territories, we’re only able to approximately determine their journey over the course of the months.

The precise timing of the migration depends entirely on the rainfall patterns that happen every year. Nor is it confined to the unfenced National Park either, and instead flows without interruption into the surrounding Game Reserves.

Here’s a brief summary of the arduous journey that hundreds of thousands of animals perform every year:

Other than during the August to October period when the migration is in Kenya, Tanzania is the place to be for this natural wonder.

For any visitor to the Serengeti National Park, the wildlife spectacle of the great migration offers a huge enhancement to what is already an overwhelming sight. We hope you enjoyed learning about this fascinating wonder of the natural world. Until next time!

Animal Migration: When Does It Happen And Why?
Animal migration is truly a wonderful sight. As the seasons change, flocks of birds cross the sky and marine animals swim many miles to warmer waters. Read more »
Link copied!
Interesting Articles
Birds
The European Robin: A Bird with Charisma

Interesting Articles
Birds
The European Robin: A Bird with Charisma