Facts About Flamingos: Learn About This Unique Bird

Their beaks are shaped liked hooks, which allows them to rummage through mud to find food. The intensity of of their pink coloring indicate their level of health. A paler color means that the bird is malnourished. 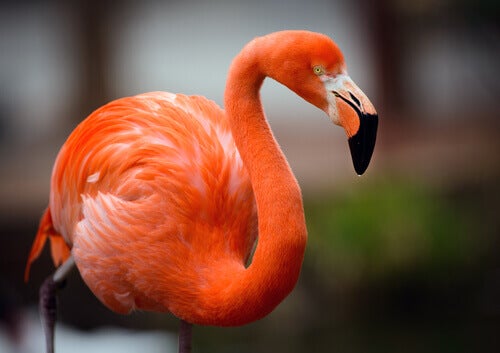 The first thing you think about when you hear the word flamingo is a pink bird with long legs that moves in a strange way. In this article, we’ll tell you some facts about flamingos. This is a beautiful animal whose flight is majestic.

These birds belong to the genus neognata. They are large birds and can measure between 2.5 and 4.5 feet long. You probably know them from their long necks and legs. Their feet actually have four toes – three in the front and one rear toe. These are all linked together by a membrane.

Additionally, people know this bird for their hook-shaped beak. This allows them to search through the mud for food. Then, they have a thin membrane to filter out mud. In fact, they only move the upper jaw, which is smaller than the lower jaw.

All subspecies of flamingos are pink. However, they vary from lighter (European) to darker (Caribbean). In fact, when the hatchlings are born, they actually are actually gray or white. Then, they become pink as they feed. The pink color comes from the carotenoids they get from eating food!

As a result, you can tell if a flamingo is well fed just by looking at its feathers. Their coloring helps them, among other things, find partners. The pinker they are, the more desirable partner they are. Otherwise, if their feathers are too pale, other flamingos consider the specimen to be sick or undernourished and not suitable for breeding healthy offspring.

Facts about flamingos: Food and habitat

The diet of this particular bird is made up of algae, shrimp, crustaceans, and plankton. In order to feed, they need to live in large areas of shallow saline or alkaline water. They also need to live at sea level – a maximum of 16,400 feet above sea level.

Flamingos live on all continents except Oceania and Antarctic. Currently, the three subspecies are:

Flamingos live in large groups of up to 20,000 birds. They are very sociable and continuously interact with other members of the colony.

Although these birds aren’t in danger of extinction, the natural habitat of the flamingo is growing smaller due to the contamination of water reserves. In addition, cutting down native forests also affects their habitat. Also, a lack of rain in some regions has drastically changed their reproductive habits and greatly reduced populations.

Once a flamingo is six years old, they’re ready to reproduce. To do this, they must wait until the mating season. This happens once the rain comes. Then, they find a partner through a courtship ritual or “dance.” Males preen and turn their heads to impress the female they desire.

Once mating is achieved and copulation occurs, the female lays a single white egg. Then, they deposit it in a cone-shaped nest that they create from twigs, stones, and mud. They incubate the eggs for six weeks. In fact, the mother and father both share the work of keeping the egg warm.

When the baby is born, they are fed a “milk” produced by the glands of the parents’ digestive tract. After a few months, the chick has already developed its beak and can feed like adults. Then, at three years of age, the feathers take on their pinkish hue.

Flamingos are also known for their beautiful and fast flight. In fact, they can reach up to 40 miles per hour and embark on long trips. For example, they can travel hundreds of miles in one day in search of food for themselves and other members of the colony.

The Amazing World of Birds of Prey
Birds of prey are essential for the survival of the world because they're a natural pestiside. They come in all shapes and sizes, some are even nocturnal. Read more »
Link copied!
Interesting Articles
Birds
Discover 5 Different Types of Owls