Some Curious Facts about Flamingos

There are many curious facts about flamingos that make them very interesting, unique animals. We'll look at some today. 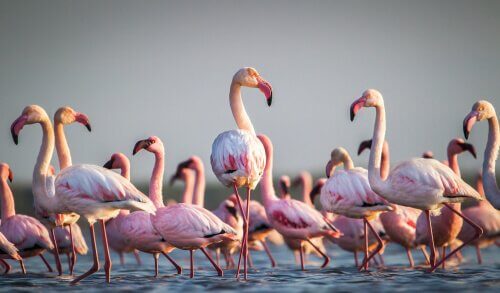 Flamingos are a striking group of birds, known as the Phoenicopteridae family. Some things these birds all have in common are their curved beaks, graceful movements, and pink color. However, there are many other curious facts about flamingos.

Why are they called flamingos?

One of the curious facts about flamingos is the origin of its name. The word flamingo comes from the word flame, which refers to its reddish color. In fact, its scientific name, Phoenicopterus ruber for the most common species, means the red wings of the Phoenix.

There are many curious facts about flamingos. Perhaps this is why their six subspecies have attracted attention throughout history.

Where do flamingos breed?

One example of strange breeding practices is where the dwarf flamingo breeds. This is one of the most curious species of flamingo, especially because of its breeding place. They breed in some lakes in Tanzania. However, the mud nests of these flamingos are surrounded by water with a very high pH and temperature, a place where few animals can survive.

In fact, researchers have found remains of these animals perfectly preserved. The remains survive in these difficult conditions because of the scales that cover their legs.

The main breeding area of this particular species in Lake Natron, a salt lake that looks like something from Mars. It has red water, white foam, and geysers. Although few animals can survive in this lake, the dwarf flamingos consume the algae that grow there.

One of the curious facts about flamingos deals with its beak. The shape has inspired engineers who are making turbines. The birds actually use the beak upside down. The upper jaw touches the water first, due to the position the birds get in to eat. This makes their beak one of the most complex out of all birds.

Once the beak in the water, the bird’s tongue acts as a pump to suck water into the beak. Then, the animal filters the water and take in any nutrients. Flamingos typically consume algae, small arthropods, and fish.

However, this unique way of eating makes them very dependent on water. In fact, although scientists have been unable to confirm this, flamingos seem to know when it rains hundreds of miles away. They appear in newly formed lakes in very dry areas of Africa.

Curious facts about flamingos: the reason for their color

Another of these curious facts about flamingos is why they have a pinkish color. It’s due to their diet, which is high in carotenoids, these animals acquire a pink color. The pigments from the carotenoids end up in their fat and feathers. The animals also produce an oil rich in carotenoids that allows them to enhance these colors. The pinker a flamingo is, the more chance it has to succeed in courtship.

Courtship is vital for flamingos. They are monogamous and only lay one egg, meaning they take a great deal of care with their offspring. Flamingos make a delicate mud next to take care of their only child. However, they are one of the longest living birds, which means that among these curious facts about flamingos is the fact that they reach up to 70 years of age. This is similar to parrots.

While caring for their young, however, adult flamingos make a great sacrifice. After they are born, the chicks are gray. They become the same color as their parents, but the parents become paler. As they feed their baby, the parents sacrifice part of their carotenoids. However, these curious birds end up amazing the world with their beauty. 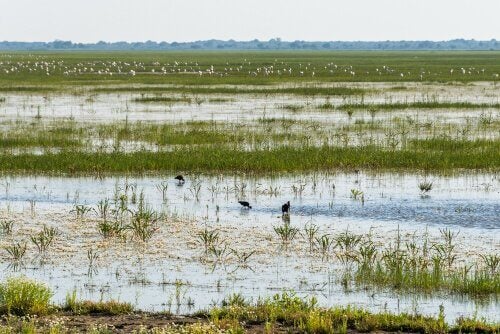