The Koala is a Master at Adapting to the Environment

Among some of the many curious facts about the koala, its particular diet stands out, as it only eats eucalyptus leaves. Read on to learn more! 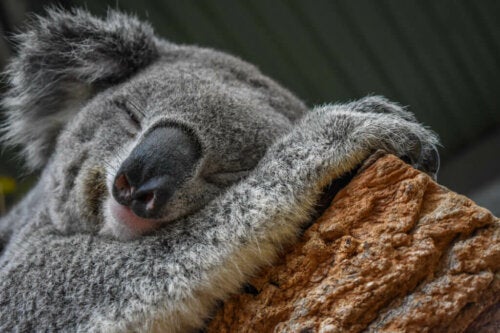 The koala (Phascolarctos cinereus) is a marsupial we always associate with its homeland, Australia. The scientific name for this primitive creature means “ashen gray bagged bear”.

The koala is the last living species in the family of the fasccoli, marsupials that went extinct millions of years ago. In fact, its only closest living relative is the wombat (of the Vombatidae family). Along with other extinct families, it makes up the diminished suborder of the Vombatiformes.

Its interesting to know that the word koala in the aboriginal language means “no water”. This alludes to the fact that this animal doesn’t move to look for water sources. Thus, it’s believed that the animal gets all the water it needs from the eucalyptus leaves it eats.

Without a doubt, eating eucalyptus was a survival strategy, as the koala wouldn’t have to compete with other animals for food. However, the same adaptations that allowed it to survive with this food make this species vulnerable today.

This is because eucalyptus forests are depleted. Therefore, understanding and disclosing the specific needs of the koala is another step in their conservation efforts.

Eucalyptus leaves, a highly specific diet for the koala

Throughout evolution, the koala started to live on an almost exclusive diet based on eucalyptus leaves. This is characteristic because, of the 600 eucalyptus species that grow in its distribution area, it only eats about 30 of them.

From a nutritional standpoint, eucalyptus leaves are a poor food, high in fiber and low in nitrogen. A major adaptation this species made to be able to digest around 3 lbs of eucalyptus leaves daily is having greatly developed an intestinal portion called the cecum.

This segment is about six feet long, which is much longer than the two inches it measures in humans. Thanks to this extensive cecum, they have an increased microbial fermentation capacity, which improves their nutrient absorption. Also, the cecum harnesses the water the leaves contain.

There’s a reason why not many animals eat eucalyptus. It’s a plant rich in tannins and other highly toxic compounds (terpenes, for example) which are also volatile compounds that give off a characteristic smell.

In order to take advantage of eucalyptus leaves as food, the koala developed several strategies:

Gut bacteria are key to living on eucalyptus leaves

The lactation period in koalas is 12 months. Around six months, the mother begins to prepare the joey for its eucalyptus diet. Thus, the mother predigests the leaves and produces a fecal matter known as “pap” that the joey eats directly from its cloaca.

The composition of this pap is very different from that of regular feces, resembling the content of the cecum more closely. In fact, it has a high concentration of the bacteria that inhabit it. The joey feeds on this pap for about a month; experts consider it to be the transition diet for it to be able to digest the adult diet on its own.

When it’s born, the intestines of the koala don’t contain these bacteria. Without them, it wouldn’t be able to extract enough nutrients from plants.

The koala knows how to harness water

According to koala behavior studies, experts have established that the moisture eucalyptus leaves contain is this animal’s main source of water. Nevertheless, their intake is supplemented with rainwater or morning dew.

In addition, to conserve the greatest amount of body water, the koala almost completely reduces moisture in its stools. This is why its stools are pellets very similar to those of camels.

However, it’s surprising to know that the koala’s kidney function doesn’t resemble that of animals adapted to the desert. Instead, it’s typical of animals that live in environments where there’s a lot of available water.

One of the secrets to living “without water” was recently revealed, when experts completed an analysis of the koala genome. The study found that their tongue could overexpress a protein with a high affinity for water, an aquaporin. This characteristic gives koalas the ability to “taste water” and selectively consume the leaves with more moisture.

Under the Nature Conservation Act 1992 of the Parliament of Queensland, Australia, koalas are classified as vulnerable throughout Australia and are a protected species. In 2012, the Threatened Species Scientific Committee estimated an average decline of 28% in the koala population.

This rate is substantially influenced by a severe decline in forests in the Australian outback regions, which suffer drought.