The Orangutan: Characteristics, Behavior and Habitat

The orangutan is one of the most widely-recognized and beloved species of great ape in the world. Today, we want to tell you a bit more about these fascinating creatures. 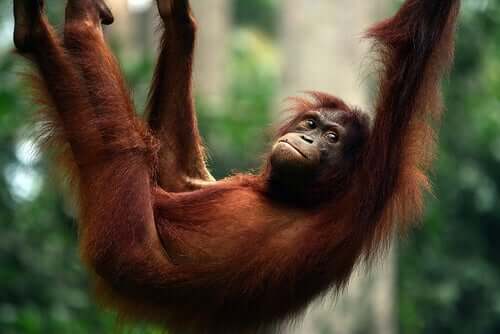 Our planet is home to several different species of primates. The best-known species are probably the chimpanzee, gorilla, and orangutan, with the last two being the largest primates in the world. Today, we want to tell you everything you need to know about the orangutan. Ready to get started?

Everything you need to know about the orangutan

The name orangutan means “man of the forest”. Classified in the genus Pongo, orangutans are part of the Hominidae family. In spite of their size and slightly wild appearance, they’re fairly docile animals, and spend much of their lives up in the trees. However, they’re famous for their sudden mood swings.

Their fur is long, reddish-brown, and fairly sparse. In fact, they hardly have any hair on their chests, stomachs, or palms of their hands. When standing, they can measure up to 6 ft in height, though they generally measure no more than 5 ft 7″, excluding their arms, which can measure almost 10 ft when fully extended. Plus, they can often weigh over 200 lbs.

One of their most notable physical features is the large pockets of fatty tissue on the face and neck, which are known as cheek flaps. Experts believe that the larger the cheek flaps, the more dominant the animal is.

The orangutan: habitat and diet

Sadly, the orangutan is an animal on the verge of extinction. While they’re mainly found in Sumatra and Borneo, archaeologists have found fossils which put the first orangutans in central China, more than 10000 years ago. Experts estimate that there are around 25000 orangutans left in the world today.

They love living in tropical rain forests. The dense, leafy trees provide comfort, as well as shelter in winter, and shade in summer.

Orangutans mainly live on a diet of fruit, which is why they live in rain forests. There, they can find all different kinds of fruit. They naturally know which are available at each time of year, and which are the best to eat.

As well as fruit, they also eat leaves and flowers, and will search for insects such as ants, grasshoppers and termites in the bark of trees.

Orangutans are solitary animals. In fact, they spend around 90% of their time alone. While females will spend several years caring for their young, the males aren’t involved in raising offspring at all.

Female orangutans maintain strong relationships with their mothers throughout their entire lives. In the case of male offspring, they will leave their mothers when they reach adulthood, and go in search of their own territory.

When there’s plenty of food available, orangutans enjoy gathering in groups to feed. They will even play together and throw food at each other. However, this can be an issue when food is scarce, and it becomes all about “survival of the fittest”.

Orangutans don’t have a hierarchy. However, as we mentioned earlier, the cheek flaps on their face and neck indicate which male is dominant. While they’re not known to be aggressive, they can become defensive when they feel threatened.

Experts have observed some orangutans using large leaves to protect themselves from the rain, clean their faces, and make loud noises to scare off predators. What can we say? These are highly intelligent animals.

So, did you enjoy learning a bit more about these fascinating primates? Getting to know the animals that share our planet is the best way to learn to love and respect them and, with any luck, avoid a future where they no longer exist.

Mountain Gorilla, a Unique Primate
There are some animals that have a history and relationship with humans that is unique. These stories call to us and the mountain gorilla is one of them. Read more »
Link copied!
Interesting Articles
Mammals
All About the Southern Right Whale Dolphin