The Sumatran orangutan is very similar to humans. It walks upright, uses tools and has a great social life. However, they're also in critical danger. 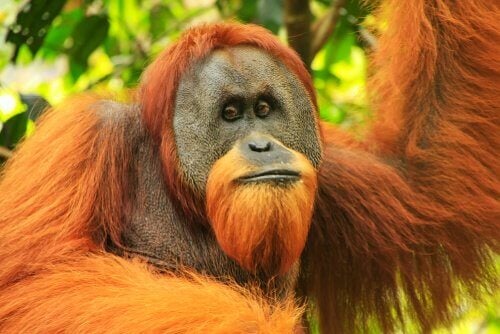 Experts say that this is the most human-like primate around, because of its size, the fact that it walks upright, and certain other behavior it exhibits. In this article, we’ll tell you everything you need to know about the Sumatran orangutan, one of the subspecies of this genus.

Physical characteristics of the Sumatran orangutan

Its scientific name is Pongo abelii and it’s one of the three subspecies of the orangutan family. The Sumatran orangutan only inhabits the north part of the island of Sumatra and is quite difficult to find.

There’s a certain sexual dimorphism in the Sumatran orangutan, like with most primates. The males are taller and heavier – they are 55 inches tall and they weigh 198 pounds, while females are 35 inches tall and weigh 99 pounds.

If we compare the Sumatran orangutan with the other two subspecies, it’s thinner and it has a longer face. In addition, the color of its fur is a lighter reddish tone.

The common name of the species (orangutan) is based on two local words. The first is orang, which means person and hutan, which means forest. Therefore, he’s a forest person! He gets this name because of certain behavior that he exhibits.

Experts have seen some of them using tools. For example, they tear off a tree branch, remove the smaller branches and tear off one of the ends to use it like a shovel. They use this tool to find hidden termites.

They can also use that same stick to move the bees from the honeycomb and reach the honey (as if it were a spoon). Scientists have even observed them making containers using leaves or other materials in order to collect rainwater that they save and drink later.

This species is mainly frugivorous – they prefer large, fleshy fruits. They complement their diet with insects such as termites or ants, as well as with leaves and bark.

Although they don’t do it very often, Sumatran orangutans will very occasionally eat meat. However, they don’t ‘need’ it, nor do they have the natural instinct to hunt as other mammals do. It’s an adaptation and an alternative to seasonal shortage of fruits. When this happens, a female may kill an adult or elderly lori and eat it with her young.

This species is in critical danger of extinction due to deforestation in its home, the conversion of forests to cropland or palm plantations for the food industry, and, of course, hunting for illegal sale (the black market for pets and animals).

This means that the orangutan population of Sumatra is confined to the extreme north of the island, in the province of Aceh. Fortunately, a sanctuary and a national park (Gunung Leuser) have been created in this province to protect this primate.

The work of rehabilitation and reintroduction of captive or displaced individuals and the protection of the forest habitat are showing positive results, but it’s slow going. Experts believe that in 20 years the species will no longer be in critical danger of becoming extinct. Instead, it will go on the ‘vulnerable’ list.