Spain, The Gateway To Illegal Animal Trafficking In Europe

Spain is the largest recipient of reptile skins like crocodiles and snakes. At least 33% of this kind of illegal animal trafficking takes place in this country. 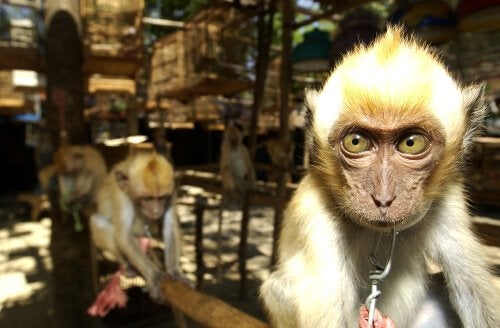 Illegal animal trafficking continues to be a profitable business in Spain due to the lack of political resistance.  According to WWF, Spain has become the gateway for smuggling exotic animals into Europe.

Spain, suspense in the fight against illegal animal trafficking

The last report from the NGO makes it clear: as a nation, Spain has to enforce laws to fight against illegal animal trafficking. Internet sales are increasing due to limited sources, and a lack of resistance against this problem. Europeans still want to have exotic animals and Spain facilitates their sales with very little resistance.

There’s a lack of coordination on behalf of the authorities and they also don’t provide special training for illegal animal trafficking in many of the autonomous communities. Likewise, there seems to be a lack of awareness and sensitivity towards this problem in Europe.  For example, many people still don’t know that it’s ilegal to have monkeys as pets.

The figures for illegal animal trafficking in Spain

WWF defines the illegal trafficking of animals as a bloody business that’s very similar to human trafficking, prostitution, and gun and drug trafficking. According to conservationists, the difference is that authorities rarely persecute offenders, despite the fact that the fines could amount to 20 billion euros annually.

This business is the second leading cause of the worldwide loss of biodiversity. Endangered species such as tigers and rhinos are in serious danger because of illegal animal trafficking.

The figures in the study are alarming. For example, Spain is the leading buyer of hides that come from snakes, crocodiles and other reptiles. Therefore, a third of the trafficking of these skins takes place in Spanish territory.

In regard to the illegal trafficking of animals in Spain, the country has imported 92,000 mammals and 2.5 million reptiles, in addition to millions of plants. Most of these animals were alive, so it’s likely they became pets.

Spain has become a gateway for this kind of business. African animals, like the Gibraltar Macaque or the black turtle, are distributed from Spain to the rest of Europe.

The WWF study highlights hunting products and trophies, with special emphasis on ivory and other parts of the African elephants. Spanish authorities have seized 1,095 trophies from this species in recent years.

One of the most alarming victims of illegal animal trafficking is the eel. These animals are quite profitable in countries like China because they can sale for 1500 euros per kilo.

The WWF reports the questionable conditions of rescue centers for exotic species. Of the 35 existing centers, only five have a collaboration agreement that only subsidizes 10% of maintenance expenses of the animals.

To be clear, these animals species cannot return to their habitat after authorities seize them. So, the animals must remain in captivity at one of these centers during the rest of their lives.

When rescued, these animals become the property of the Spanish government. Instead of making centers to house these animals, the government allows these centers to keep the animals. However, they don’t provide them with any financial aid.

These rescue centers include several zoos that use part of their facilities to rescue victims of illegal animal trafficking. They also consist of special places, like primate sanctuaries.

The government approved the Spanish Action Plan against Illegal Trafficking and International Poaching of Wild Species and it’s working well. However, the WWF commits to allocating more financial and human resources toward private rescue centers, environmental education and the fight against illegal animal trafficking.