What Elephants Eat in Captivity 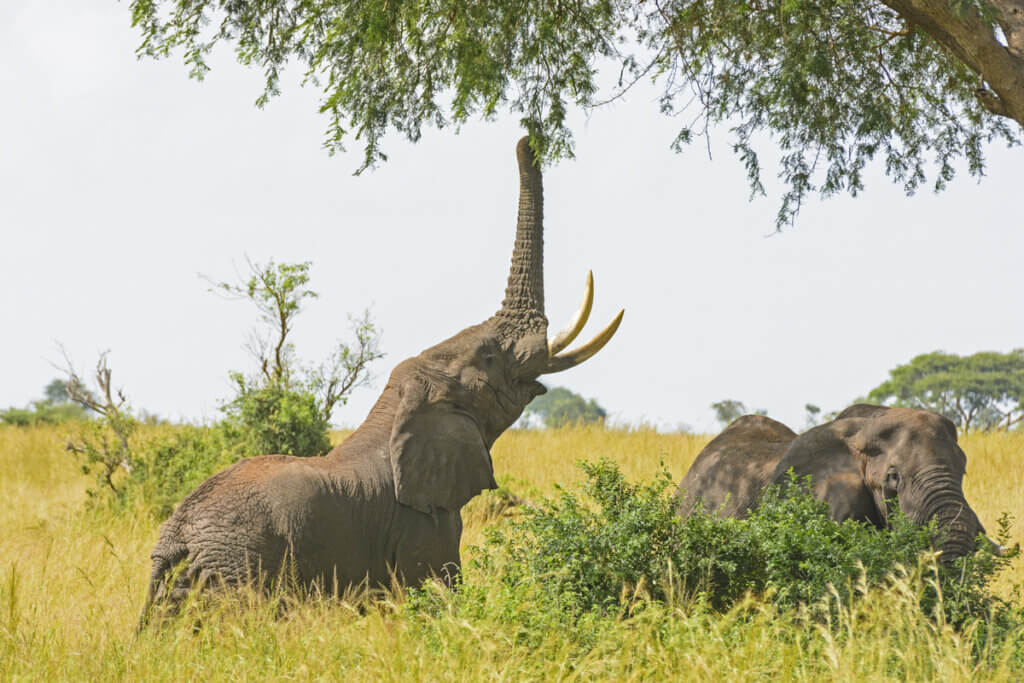 When it comes to planning what elephants eat in captivity, it’s extremely helpful to understand their natural eating habits and know which nutrients they need and when. Furthermore, considering how picky elephants are, it’s important to be prepared, in order to keep these larger-than-life mammals healthy.

In this article, we’ll discuss the common nutritional needs of elephants, and how poor diet can lead to serious health problems.

The natural diet of elephants has been well-documented for the three existing species: African bush elephant, forest elephant, and the Asian elephant. However, more information is needed about the reasons surrounding selective eating habits and other feeding patterns.

Wild elephants have ample appetite and eat over 400 types of plants. The largest part of what elephants eat is usually grass, then leaves, twigs, roots, fruits, seeds, herbaceous plants, earth, and rocks. Despite this wide range of foods, studies show that elephants are quite picky in reality.

For example, during the wet season elephants ditch their previous eating habits and opt for grazing. In other words, they consume mainly reeds and herbs during the time of year when their protein content is highest. Multiple studies show that elephants know exactly what they need every season of the year.

Scientists have found similarities in the eating habits of wild animals and animals in captivity. There are three peak feeding times:

Having to find water and shade will impact how much an elephant needs to eat. This is true for both captive and wild elephants.

What are the nutritional recommendations for elephants?

Until there is more data available, the minimum nutrient requirements for elephants are based on the recommended guidelines for horses. In other words:

However, available data known as the “growth requirement,” stipulates that elephants should eat approximately 2.8 pounds of protein a day. If an elephant eats less than this amount or is fed poor-quality hay, it can develop a protein deficiency and become ill.

Concentrates balance out vitamin deficiencies from a high-fodder diet, but should in no way replace fodder as the main source of fiber. Otherwise, the elephant could suffer from digestive issues.

Even still, at certain times during an elephant’s life, it might be appropriate to substitute hay for alfalfa and increase supplements. For example, this might be necessary during pregnancy.

It’s vital that elephants in captivity consistently eat good-quality hay and fodder. In fact, this should be the biggest part of their daily food intake.

On average, adult elephants need to consume 70,000 calories a day.

To achieve the necessary daily caloric intake, meals should include:

How can an elephant’s diet affect their health?

Caring for elephants in captivity is neither easy nor cheap. That being said, caretakers seek to optimize the health of their elephants to enhance their well-being and, as a result, improve their life expectancy.

Just like in other species, a poor diet can cause wreak havoc on an elephant’s digestive system and metabolism.

Unfortunately, animals in captivity tend to suffer from health problems like obesity because of a lack of exercise. This often happens because their enclosures are too small or, worse still, they might feel isolated and under-stimulated.

Intestinal issues are also a big health concern many caretakers have. However, basing the elephant’s diet on good-quality hay is the best way to combat this. It’s not recommended to feed elephants fruit, grains, bread, or “people foods” as they can be detrimental to elephant health.

The Intelligence of Elephants: How Smart Are They?
Do you know how smart elephants are? In this fascinating article, we'll tell you all about the intelligence of elephants! Read more »
Link copied!
Interesting Articles
Mammals
The Elephant Seal, a Lifetime in the Cold