Interesting Facts About the Behavior of Wild Elephants

Every animal species displays differed behaviors and characteristics when they find themselves in a favorable environment. This makes it easier to recognize and study them from a scientific standpoint and allows us to understand them much more. Today we'll look at the behavior of wild elephants. 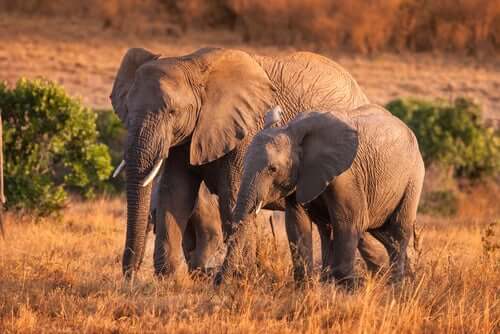 Elephants that live in their natural habitat have the ability to fully develop their ethological behavior. By observing them, we can recognize numerous attitudes that are representative of this species in nature. Below, we’ll share some interesting facts about the behavior of wild elephants.

Interesting facts about the behavior of wild elephants

Given their gregarious size and nature, elephants’ matriarchal societies don’t tend to fall prey to predators. However, having said that, their young can sometimes be quite vulnerable.

Just like hoofed animals, newborn elephants are able to walk quite quickly. This trait allows them to keep up with the rest of the herd. Just the same, young elephants are vulnerable to predators’ attacks, especially when they stray from the group.

Adult elephants tend to deal with threats by dissuading the threatening predator, going after it as a group until it runs away. However, they aren’t often alert to all dangers, meaning that predators can sometimes catch them off guard.

Healthy adult males are very intimidating, and their mere presence tends to frighten off any predator. This is especially interesting considering that elephants are a peaceful species most of the time.

Just like their young, wild elephants that are sick or injured are more susceptible to falling behind and suffering attacks. Elephants’ social behavior includes helping the weakest members of the heard.

We can affirm then that the pressure of predators–with the exception of hunting by humans–is not a decisive factor in the control of wild elephant populations.

We find elephants living in a variety of habitats, which means that their diets are very diverse. Foraging includes everything from grass to fruits, bark, roots, leaves, and branches. The combination of their trunk, their powerful tongue, and an incredibly strong body allow elephants to feed off small plants as well as trees.

Studies show that groups of male wild elephants are much less selective in their search for food than females. Males tend to prioritize quantity while females are more inclined to look for quality food sources. This tendency may have to do with improving the quality of the milk they produce for their young.

The reproductive behavior of wild elephants

Both males and females mate with more than one partner when in heat. On the other hand, females tend to have only one baby per pregnancy

This system of multiple mating partners is known as polygamy.

Female elephants offer shelter for their young during the first 10 to 15 years of life. In other words, until they reach sexual maturity in the case of females, and until the period of dispersion in the case of males.

When it comes to courting, male elephants don’t necessarily have to be in musth. However, studies show that they are more reproductively dominant than those who aren’t. Musth is a phase during which male elephants (or “bulls”) display a more haughty and aggressive attitude. They hold their heads higher, stretch their ears, and puff their chests.

Play among animals has no vital function, but it serves to prepare individuals for unexpected or stressful situations. Although young elephants have been observed carrying branches, running around, and chasing small animals, experts actually know very little about the playful behaviors of this species.

The only thing experts do know is that males have a much more aggressive way of playing. They tend to initiate false fights with other male individuals of the same age, including males from other family groups. Females, on the other hand, have more peaceful encounters, usually with younger females.


The German Shepherd and the Baby Elephant, an Unlikely Friendship
Learn about the incredible story of a sick baby elephant and a German Shepherd that helped to save his life. Click here to read more! Read more »
Link copied!
Interesting Articles
Wild Animals
The Fauna of the Himalayan Mountains