Do Rattlesnakes Use Their Scales to Store Water?

Different types of snakes have adapted to their surroundings in order to take maximum advantage of the available resources. With that in mind, we're going to look at how rattlesnakes use their scales to store water. 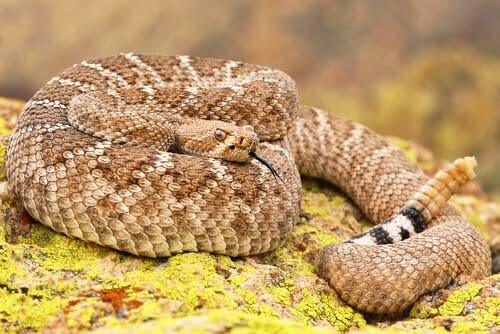 Have you ever asked yourselves what snakes do in order to survive in regions where water is scarce? Might they have a system to store this vital liquid in their bodies? Well, the answer is yes. Rattlesnakes use their scales to store water and survive in inhospitable environments.

We’ll take a closer look at this interesting issue below. However, before we do, we’ll go over some general aspects.

The classification of rattlesnakes

First of all, it’s important to distinguish between snakes, cobras, and vipers. People tend to use these terms interchangeably, but there are differences between them.

The term “snakes” refers to the suborder of reptiles (sauropsids). Therefore, when we talk about snakes, we’re referring to the entire suborder. And within this suborder, we find both cobras and vipers.

Rattlesnakes make up part of the viper family within the snake suborder. In this case, rattlesnakes belong to the Crotalus genus and are poisonous snakes.

The Crotalus genus encompasses a total of 32 known species, with numerous subspecies. For this reason, all of the species possess the typical triangular-shaped head and rattles located at the end of their tails.

Other physical characteristics of this species are eyes with vertical pupils, tubular fangs that retract, and a wide body. In regard to the rattles in their tails, snakes can break them or lose them, and young snakes don’t have them.

Within this genre, each species displays certain patterns that are unique to their skin. Among the color variations we find browns, greys, and black as well as cream, yellow, and olive.

Rattlesnakes are cold-blooded animals that go into brumation during the cold months of the year. This is a state of dormancy similar to hibernation. When warmer temperatures come around, around the month of April, they come out of hibernation. However, they stay close to their den for several days after coming out.

During brumation, they shelter in the cracks of rocky ledges. In spring and summer, these snakes migrate towards habitats that are rich in food sources.

Rattlesnakes are nocturnal animals that hunt a variety of prey, which are normally small-sized rodents. Once they have ingested their prey, they remain hidden and inactive while they digest it.

These snakes live in a variety of areas, starting at sea level and moving up to mountainous regions at elevations of some 10,000 feet. Other species live in desert areas, spending on the type of snake.

Rattlesnakes are well-known to be the most venomous snakes in North America. However, there are other reasons why these animals are so interesting, besides their potent venom.

How do rattlesnakes use their scales to store water?

Some of the rattlesnakes that live in the southeastern United States display peculiar behavior. Such is the case with the western diamondback rattlesnake (Crotalus atrox), which possesses a characteristic diamond pattern.

The western diamondback rattlesnake lives in the southeastern region of the United States and has an exclusive technique for surviving in this arid climate. These rattlesnakes use their scales to store water and, to do so, they change the position of their bodies.

In order to store water in their bodies, they dorsoventrally flatten their bodies, forming a rolled-up bobbin. This allows them to collect as much water as possible, no matter what physical state it’s in (snow or rain). In other words, they can store water from both snow and rain.

As they accumulate water drops, their dorsal scales come together, allowing the snakes to drink the water. Therefore, the body of these snakes has a specific design that allows them to store water in this way. Amazing, isn’t it?

How did scientists discover that rattlesnakes use their scales to store water?

A group of scientists carried out a study of the western diamondback rattlesnake. They focused their research on the role of their dorsal scales in the collection of water.

In order to determine how this collection technique words, the researchers used electronic microscopy. This allowed them to observe how water impacts the skin of these animals.

They were able to observe the presence of a network or labyrinth on the backs of these snakes. Scientists have also confirmed this feature in two other species of the same family. These are the desert kingsnake (Lampropeltis splendid) and the gopher snake (Pituophis catenifer).

Scientists also studied the behavior of these two snakes regarding the collection of rain and found it to be different. Only certain species of rattlesnakes display this behavior in order to survive in hot and dry environments.

However, other snakes that live in the desert have developed their own techniques. These techniques allow them to obtain hydration in arid climates like the desert.

The development of this method of storing water is a great natural strategy. Thanks to this, these snakes can prosper in complicated regions like deserts.