Everything You Want to Know About the Russian Tortoise

The Russian tortoise is very popular as a pet because it's easy to look after. However, you should take into account that, as a cold-blooded animal, it needs a specific room temperature and also space to move around. 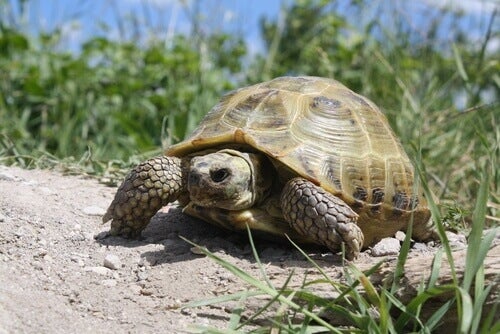 It’s the most famous tortoise in the world, and, although its natural habitat is Eurasia, it currently inhabits the whole world. In this article, we’ll tell you everything you need to know about the Russian tortoise, a favorite pet in thousands of homes.

Characteristics and habitat of the Russian tortoise

This animal actually goes by several different names: Russian tortoise, Afghan tortoise, Central Asian tortoise, Horsfield’s tortoise, four-clawed tortoise, or steppe tortoise. It lives throughout Asia and you can also find it in Russia, China, Pakistan, and Afghanistan. What’s more, witnesses have spotted this species in Kazakhstan, Uzbekistan, and Turkmenistan as well.

It prefers dry steppes, near watercourses, and extreme climates with cold winters and hot summers. It also inhabits the outskirts of prairies and deserts.

As for its characteristics, we can highlight that the females are larger than males (about 8.5 inches and 7.5 inches, respectively). What’s more, the shell in both sexes is slightly flattened, dark or light brown, as are the extremities.

The front extremities are robust and have four developed nails. This feature differentiates them from other species of the Testudines family, which have five.

The behavior and diet of the Russian tortoise

It’s active only a few months a year,  as it hibernates in winter in burrows up to 9 feet deep that it digs itself. When spring begins, it takes advantage of this time to reproduce and feed. During the day, it warms its body and uses sunlight to accelerate its metabolic functions.

This tortoise is herbivorous and feeds on dry grass, flowers, herbs, and vegetables. In times of drought, it must supplement its diet by ingesting excrement and arthropods.

Reproduction and longevity of the Russian tortoise

Once it wakes up from hibernation, in the first days of spring, the male begins his sexual courtship. To do so, he follows, hits, and bites the female. During copulation, which lasts between 10 and 12 hours, the male specimens emit sounds. However, he’s mute at any other time in his life.

Females are able to preserve the male’s semen for several weeks, months, or even years. Sixty days after copulation, they dig holes in the ground with their hind legs and deposit their eggs between May and June.

The incubation period and the sex of the hatchlings will depend on the ambient temperature. When it’s less than 88°F, mostly males will be born. In any other case, females are abundant. The Russian tortoise reaches sexual maturity at the age of 10, which is why it can live up to 40 years in the wild.

The Russian tortoise as a pet

The Russian tortoise is a very common pet, because it’s very easy to maintain and look after. However, it needs plenty of space to move around and, above all, needs sun exposure. It’s a very curious and dynamic animal! At a slow but determined pace, it will explore all the terrain it has at its disposal.


Some owners buy terrariums that include special UVA and UVB tubes for reptiles. This allows them to recreate their natural habitat. In no case should the temperature of your home exceed 95°F.

To feed a Russian tortoise, you must have all kinds of vegetables: grass, carrots, chard, broccoli, spinach, and dandelion. At the same time, you need some fruits like strawberries, apples or pears. Also, a daily supply of fresh water is essential.

It’s very important that the animal should be able to hibernate once a year. To do this, you place it in a special terrarium, with a low temperature (between 4ºC and 8ºC) and a substrate floor that serves as bedding.

Finally, you mustn’t forget that the Russian tortoise is an animal that, although it’s been domesticated, still retains many wild habits. Therefore, you shouldn’t hold them or raise them from the ground to play.

This will only stress them out and cause their health to deteriorate. It’s better to let them walk around as if they were in their natural habitat.

Turtles as a Cultural Symbol
Have you ever heard about all the things turtles as a cultural symbol represent around the world? Let's take a closer look! Read more »
Link copied!
Interesting Articles
Reptiles
Types of Lizards in the Animal Kingdom