The Intelligence of Elephants: How Smart Are They?

We've all heard the phrase "memory of an elephant." However, this isn't just by chance! In fact, many studies show that elephants have significant cognitive abilities and emotional intelligence. 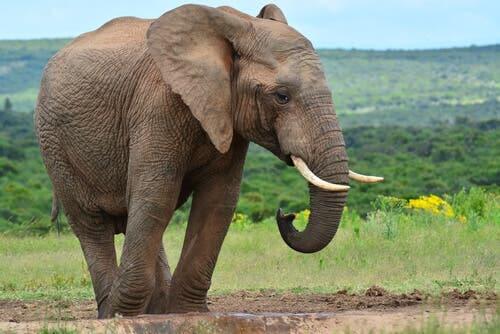 You must have heard the expression “the memory of an elephant.” Well, what may have just seemed like a saying is now supported by science. Various studies confirm the cognitive potential of these giant land mammals. To learn more about the intelligence of elephants, read on!

The brain structure of elephants

Elephants have the largest brains among land animals. In fact, their brains weigh more than 11 pounds. In addition, an elephant’s brain has more intense gyral patterns than the brains of primates and humans. However, these patterns are less complex than those in dolphins and other cetaceans, for example.

On the other hand, the pure volume of an elephant’s cortex allows for a huge range of cognitive processing. This is the result of a high level of neural capacity. In fact, experts believe that elephants have a superior neural capacity to any primate or cetacean. As we’ll see below, this translates into different types of intelligence.

An elephant has a complex and sophisticated brain structure. With more than 250 billion neurons, their brain structure is similar to that of a human. In fact, an elephant’s cerebral cortex actually has the same number of neurons and synapses as a human’s does.

So what does all of this tell us? First, this indicates that the intelligence of elephants is on a par – in a general way – with the intelligence of dolphins and chimpanzees. Furthermore, elephants have the same cognitive capacity for the use and manufacture of tools as humans. In fact, they skillfully use their trunk as an arm to manipulate objects.

Better understanding the intelligence of elephants

Many classical civilizations recognized and admired the intelligence of elephants. Aristotle, the Greek philosopher and author of Metaphysics, claimed that elephants outperformed all other animals in brainpower and ingenuity.

Without a doubt, these statements are due to the observation of the cognitive, social, and emotional capacity of these remarkable mammals.

Elephants, whether Asian or African, demonstrate a remarkable variety of behaviors and expressions. In addition, various studies verify that these animals experience psychological grief after the loss of a loved one.

Their empathy and sociability are so evolved that they understand altruism, maternal care, cooperation, and compassion for their brothers.

A large number of synapses in their cerebral cortex allows elephants to understand nonverbal language very well. In addition, experts assume that the size of the cortex is also associated with a high capacity for mimicry.

Elephants not only imitate human gestures, but also the sounds of their environment. This is a skill that experts have only seen in cetaceans, primates, bats, and birds.

Another curious and prominent ability of elephants is the ability to understand games. For example, researches have observed African pachyderms playing with water or other objects from their habitat on several occasions.

Perhaps one of the most remarkable indications of intelligence in elephants is the ability to solve problems. For example, in their natural habitat, these mammals can radically change their behavior to deal with adverse situations.

These are all demonstrations characteristic of complex intelligence, similar to the intelligence of humans and primates.

In 2010, some elephants participated in an interesting study. The task was to simultaneously grasp both ends of a rope to win a prize.

The objective was to observe cooperative ability and the ability to work together. The results placed elephants at the same level as chimpanzees in terms of cooperative capacity. However, some accidental events also demonstrated their ability to deal with new challenges.

One of these studies looked at an Asian elephant in the United States. Nicknamed Bandula, this animal was incredible! He was able to open various devices that secured his chains. This includes an Inglefield clip, which must be perfectly aligned in order to open.

We know that elephants have outstanding cognitive abilities, but is it true that they have very good memories?

These pachyderms also possess a large, complex hippocampus. The hippocampus is the brain structure that belongs to the limbic system. Its main function is to process certain types of memory, mainly spatial memory.

The dimensions of an elephant’s hippocampus exceed those of any primate, cetacean, or human being. Furthermore, the hippocampus takes up more than 0.7% of their brain structures, compared to 0.5% in humans.

As a result of the neural volume and its significant functionality, elephants have a truly unique memory. Researchers have proven this in numerous scientific studies, but experts have also observed behaviors in the wild.

Social Structures of Elephant Herds
There are some animals, native to other countries, that we don’t know much about. Examining the social structure of elephant herds will help us learn more. Read more »