The Rhinoceros: Characteristics, Behavior and Habitat

You might have seen images about rhinoceroses many times during your life. But do you really know that much about them? Read on to find out. 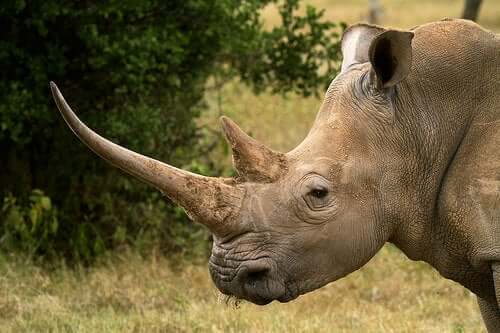 Rhinos feature in most people’s childhoods, whether in books or on a trip to the zoo. However, they’re probably not a species that you know much about, given that they probably live far away from you. So, why don’t we take a closer look at the rhinoceros today!

All you need to know about the rhino

The rhinoceros is a mammal and there are five different species: white, black, Javan, Indian, and Sumatran. Its name comes from the Greek ‘Rhis’, meaning ‘nose’, and ‘keras’, meaning ‘horn’.

As you can see, its name is a perfect fit, since its horn is undoubtedly what its most known for. Unlike other animals with a similar feature, its horn doesn’t contain a bone nucleus but is made of keratin instead. The Sumatran rhino and both African species (the white and black rhino) have two horns, whilst the Indian and Javan rhino only have one. Rhinos can generally live for around 60 years.

Their eyes are located on the side of their head and are lower down than the horn. However, their eyesight is quite poor, and instead, they have sharpened senses of smell and hearing.

Rhinos are perissodactyls, which means their middle finger is longer than normal, which is their main support, and two smaller fingers that give their footprint a tree shape.

The rhinoceros is a solitary animal that only really likes to interact with their mother or young. Adults only interact during the mating season. In some species, such as the white or Indian rhinos, there are exceptions where they form pairs which lead to larger groups later on.

They normally stick to the same territory throughout their lives, which can range from two to 60 miles, and they mark their territory with feces and urine to remember them.

Females have fewer issues with territory and there is usually no rivalry between them. In fact, they tend to rub noses as a sign that they’re welcome. The exception is the Indian rhino, which responds aggressively to any encroachment on their territory.

Males, however, will fight with any animal who sets foot on their land. When this confrontation happens, the same gestures are made over and over again until one of them gives up.

Their fights are relatively light and they don’t usually attack each other. Instead, they push each other with their horns until the other gives up. If the intruder wins, the ‘owner’ of the territory will stop marking it with his urine and feces and will assume a more subordinate position.

When it comes to their habitat, the rhino is very versatile. They can live in savannahs or forests, whether tropical or subtropical. The important thing is to have water and plenty of food since they need large amounts of both to survive.

If you thought this was interesting, maybe you’d like to find out more about the Brazilian Tapir!

The Elephant: Characteristics, Behavior, and Habitat
Did you know that the elephant is an animal that groups itself into matriarchal families? In this article, we share more interesting facts. Read more »