The Truth About Wolves Attacking Humans

We've always heard about how dangerous wolves are, while the dogs descended from wolves have gotten used to humans. While farmers can run into problems with wolves, this doesn't justify hunters' fondness for hunting this protected specimen. 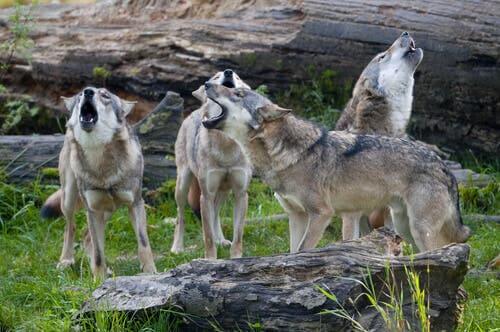 In many children’s stories, wolves are the bad guy. From childhood, we grew up with stories about how this dangerous animal can kill us. We believed this, even though it’s rare to hear about wolves attacking humans. Let’s separate the truth from the myth.

There are many folk stories that tell us about how dangerous wolves are, such as Little Red Riding Hood and The Three Little Pigs. Wolves are portrayed as cunning, persistent, and merciless. The wolves in these stories don’t stop hunting their prey until they manage to kill or defeat them.

However, this isn’t true just in our culture. For example, there are also stories about wolves from China and India that repeat this cliche. In fact, there are even ancient sayings that talk about the evil of the wolf. We can find stories about the cruelty of these animals everywhere.

However, when we analyze the statistics, it appears that wolves aren’t as dangerous as we might think. There are officially only a handful of registered cases of fatal wolf attacks on humans around the world. For example, in Spain, there was one attack in 1881. Then, there wasn’t another one until 1954, which is almost 70 years between each attack.

Globally, the last media case of a wolf attack on a human was in 2005. A teacher in Canada got lost at night in a wooded area. Later, when her body was recovered, experts verified that she had been attacked by wolves.

Experts say that wolves are afraid of humans. For example, wolves notice when humans are approaching, and either flee or hide. Sometimes, they even abandon prey they’re eating so as not to be near humans.

We should also mention that, in the statistics of wolf attacks, there are many more humans wounded by wolves than killed. This means that wolves generally attack humans to scare them, not to kill them. This further reinforces the idea that these animals actually fear humans.

As we noted earlier, there’s a big difference between the animals that evolved into dogs and those that remained wolves. Dogs stayed close to human populations and received food and shelter. This lowered their fear of humans.

In addition, many specialists speculate that some attacks attributed to wolves may not actually have been wolf attacks. People often also mistake other animals, such as large dogs, for wolves. On the other hand, there are many cases when humans scare wolves and the wolves fight back.

So we can conclude that wolves aren’t actually dangerous to humans. These animals prefer to hide and flee from humans, rather than facing them, despite what we’ve heard from popular stories.

The fight for the wolf

However, there has always been a great controversy involving these animals. Hunters justify hunting wolves due to their aggressiveness. On the other hand, environmental and protective organizations try to protect this creature.

The presence of wolves generally harms shepherds. Livestock of all sizes, from lambs to cows, can be easy prey for wolves. Wolves can not only kill these animals, but they also tend to destroy fences, injure a part of the herd, or scatter the herd during their hunting.

Some governments try to cover the expenses caused by these damages. However, shepherds and farmers complain that the government doesn’t give them enough money or delivers the money late.

As a result, farmers and shepherds are most affected by wolf attacks. However, depending on the location, they vary in frequency. The debate goes on and the statistics are open to interpretation.

Conservation and recovery of the wolf

Wolf conservation is also a contentious issue. There are many great contrasts concerning this issue in many parts of the world. For example, in some places, hunting wolves is illegal in some territories. Then, just past the border of these areas, you can get a permit to hunt wolves.

For example, within Yellowstone Park, the wolf is a protected animal. However, outside the park limits, hunters can legally hunt wolves. Another example is in Spain. Some communities protect wolves, and then outside these communities, hunting wolves is legal.

Despite this, experts report that wolf populations are increasing. Every year there are new litters and their territories are expanding in certain areas of the wold.

For example, indiscriminate hunting eliminated all Iberian wolves that lived in the mountains near Madrid. Then, in 2013, experts discovered that they returned. Since then, their numbers have grown.

Traditionally, people have always feared and persecuted wolves. However, statistics and experts agree that these animals are afraid of humans and avoid contact and confrontation whenever possible.

Genetic Divergence Between Dogs and Wolves
While most of you probably know that dogs and wolves are related, you probably don't know that dogs evolved through a process known as genetic divergence. Read more »
Link copied!
Interesting Articles
Wild Animals
5 Animals that Live in Grasslands