All About the Cavalier King Charles Spaniel

The Cavalier King Charles Spaniel is beautiful, regal, graceful, and has a great temperament. 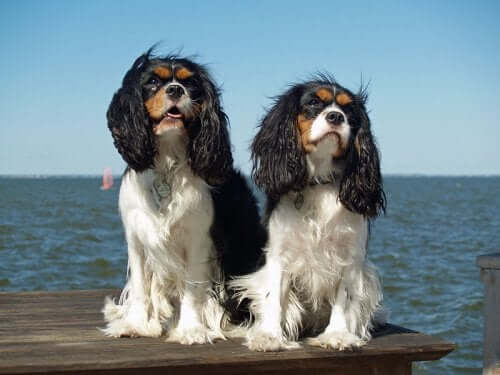 Small in size, yet elegant and somewhat regal, the Cavalier King Charles Spaniel is a rather cheerful and active dog. These cuties have been popular companion dogs for many centuries. Would you like to learn more about them? If so, then keep reading!

Origins and characteristics of a Cavalier King Charles Spaniel

The first specimens of Cavalier King Charles Spaniel emerged in England in the 16th century as “water” dogs (bred for living in swampy areas). Due to their beauty, they soon became popular among the privileged few of that country. It was also because they were easy to transport in the carriages these people had at the time. In fact, the socialites of the time used them for keeping warm under their skirts during the winter.

Charles I of England had a Cavalier as a pet while he resided in Carisbrooke Castle. But the monarch with whom this breed is mostly related to is his successor, King Charles II. The Court said that he never separated from them and that he even issued a public decree so that anyone who had one of these Spaniels as a pet was welcome in all public places.

During the reign of William III and Mary II, the water dog went out of fashion and the Pug took its place. So, the result of the mix between both animals is the modern Cavalier King Charles Spaniel as we know it today. When compared to the “original,” current specimens have shorter snouts, more prominent foreheads, larger eyes, and a less distinguished personality.

In the 18th century, John Churchill (Duke of Marlborough) had a red and white Cavalier as a faithful friend. The dog, whose name was Blenheim, helped him during his hunting expeditions. At the time, many people thought he was responsible for naming the breed.

In the twentieth century, someone recreated the “original” Cavalier King Charles Spaniel. They did so by breeding it with the Toy Spaniel Trawler (now extinct). This newer breed is currently the sixth most popular one in the UK.

These dogs get along famously with children. In fact, they’re the perfect pets, whether you keep them in a house or in an apartment. They’re happy when surrounded by their people and love walks. It’s a rather sedentary breed and has no problems getting along with other dogs.

Cavaliers aren’t too independent and strongly rely on their leaders. You must let them live indoors as opposed to an outdoor space. In spite of them barking at strangers, they’re not exactly proficient as guard dogs.

These kinds of Spaniels are quite sweet and quick. They have a huge instinct to chase everything that moves (be it an insect or a car). So, it’s best to keep them on a leash at all times. The Cavalier is a very intelligent and obedient dog who’s also affectionate, gentle, friendly, and willing to please.

Health and care of a Cavalier King Charles Spaniel

A common problem of this breed is a mitral valve prolapse with a heart murmur that slowly gets worse and results in heart failure. This is a genetic condition and is their main cause of death.

The heart condition often manifests when they’re around five years old. In fact, veterinarians developed a guide that allows these animals to enjoy a longer good quality of life.

To a lesser extent, this breed could also develop syringomyelia (a cyst in the spinal cord), hip dysplasia, knee dislocation, cataracts, and retinal dysplasia.

Finally, you should routinely brush their hair. Keep in mind that it’ll get tangled because it’s long, and also because they might come back from playing with all sorts of objects stuck on their legs, tail, and ears.

Some Extinct Dog Breeds You Should Learn About
Today, we're going to tell you about some extinct breeds of dog from both ancient times and more recent ones. Learn what happened to them in this article. Read more »
Link copied!
Interesting Articles
Dogs
Bulldog Breeds: History and Traits