This breed of cat stands out for its unusual appearance. With their large eyes and almost comically cheerful expression, you might even mistake them for cuddly toys. Interestingly, however, these feline hunters were once on the brink of extinction. 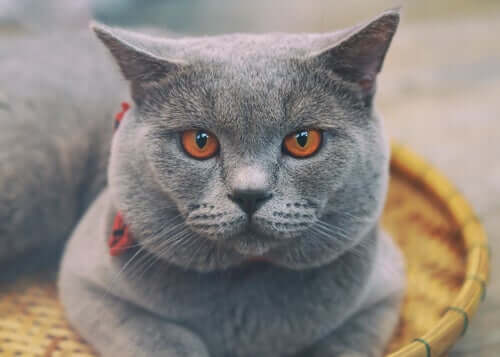 The Chartreux cat is a large, muscular breed, with thick, blue or silver-gray fur and a laid back temperament. Another well-known feature of this breed is their characteristic “smile”.

A breed on the brink of extinction

Many people believe that these cats were first bred in the Parisian monasteries of the Carthusian monks. There, they were primarily used to hunt rodents and keep pest populations down.

However, while it’s often thought that the breed has been based in France for centuries, another theory suggests that the Chartreux’s ancestors may have originated from the mountain regions of Turkey and Iran, before being introduced to France in the Middle Ages thanks to trade between Europe and the East.

While most of us wouldn’t even dream of seeing the Chartreux as anything more than a family pet, in the past, its lustrous coat was often used by furriers. There were even breeding programs to help meet the huge demand for fur coats.

As a result, the breed was driven to the brink of extinction. However, at the end of the 1920s, the Léger sisters began to develop, strengthen, and rebuild the Chartreux population, using feline colonies from the island of Belle-Ile-en-Mer. Today, the Chartreux is recognized by all the main feline breed associations around the world, and enjoys great popularity.

The Chartreux is a robust breed that stands out for its thick, slate-gray coat, and for the large smiles that seem to light up their faces.

The Chartreux, the smiling cat

Here are some of the most notable features of the Chartreux cat:

Although they weren’t kept as pets until the 19th Century, the Chartreux is the ideal family pet. Affectionate, sociable, and playful, they generally get on well with children, and can live in households with other pets.

This natural born hunter can adapt well to life as a house cat. That said, they do prefer to have access to a garden or some other outdoor space. Curious, docile and laid-back, they often display slightly canine qualities.

Easy-going and independent, these felines very rarely meow, and sleep most of the day. Although they can be shy around strangers, they often enjoy following their owners everywhere they go, and dislike being alone for long periods of time.

How to care for a Chartreux cat

With a life expectancy ranging between 12 and 15 years, the Chartreux has no genetic predispositions to disease. Natural selection has made it one of the healthiest of all the cat breeds.

Their short coats don’t require huge amounts of care. A thorough brushing once a week should be enough to stop dead hair building up. However, it’s important to keep an eye on their ears, as they tend to produce more earwax than other breeds.

As with any pet, they’ll need a healthy diet, regular check-ups at the vet, full vaccinations, de-worming and flea treatment, to keep them happy and healthy in the long-term.

Meet the Russian Blue Cat
One of the most famous and admired breeds in the world, the Russian blue cat is easy to fall in love with. Let's talk about their beauty and charm. Read more »
Link copied!
Interesting Articles
Cats
Learn All About the Asian Smoke Cat