Understanding Ailurophilia: The Love of Cats

Ailurophilia is the fondness or love of cats or other felines. In today's article, we'll tell you all about this condition. 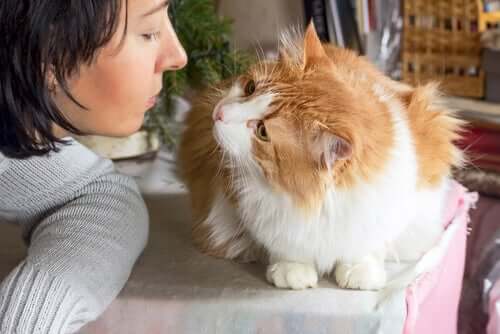 Ailurophilia: the love of cats

A feeling of love toward cats is often accompanied by a sense of admiration, fascination and pleasure. This is a lifelong condition, and rarely disappears over time.

Acute cases of ailurophilia can lead to more serious conditions, such as Noah Syndrome. Noah syndrome a disorder in which the sufferer has an urge to hoard large numbers of animals. In many cases, they continue to collect animals until it reaches the point where they are no longer able to provide their pets with the care and attention they need.

Ailurophiles have a great sense of respect, love and responsibility towards their cats. They show astonishing levels of commitment to their pets.

There are different degrees of ailurophilia. On the one hand, you have simple cat lovers. They usually only adopt one or two at a time, and may enjoy collecting cat-themed items.

There are also more extreme cases, where the ailurophile adopts, buys or rescues a huge number of stray cats from the streets. For these people in particular, it’s very important to know when enough is enough.

Ailurophilia is a form of paraphilia, a sexual behavior in which the main source of pleasure is, in this case, cats.

Ailurophiles often present sexual behaviors towards cats, or have sexual fantasies involving cats. They might enjoy dressing up their cat, or alternatively, seeing someone else dressed as a cat.

In the most extreme cases, the condition can prevent someone from leading a normal life.

The main treatment for ailurophilia involves psychological therapy. Some patients may even need to take medication. As with any psychological disorder, how long they need to receive treatment depends largely on the individual patient.

For the love of cats: pet ownership and responsibility

When you decide to bring a cat or any other animal into your life, you are making a commitment to care for and respect your pet for as long as it remains at your side. Think carefully before you make your decision.

The most basic responsibilities of a pet owner include: taking it to the vet, giving it fresh food and water on a daily basis, providing it with a place to sleep and play, and, most important of all, giving it all the love and attention it deserves.

You should never simply bring home an animal on a whim, or in an attempt to fulfill some personal need.

Another important aspect to keep in mind when it comes to cats is that, although they might be much more independent than dogs, this doesn’t mean you can simply leave them outside. Similarly, they also shouldn’t be left alone in the house for hours on end.

While cats might seem independent, they still need a family to spend time with and feel a part of. Without that, a cat will begin to feel bored, and may start to develop behavioral issues, scratching curtains or furniture, or even elimination problems.

Cats can suffer from a whole range of different illnesses. In the majority of cases, these are caused by a virus. Some common examples include:

Artists Who Transform Works of Art into Artwork with Cats
Eldar Zakirov, a Russian artisis, has decided to use the faces of cats in famous works of art, creating innovative and pioneering artwork with cats.  Read more »
Link copied!
Interesting Articles
Cats
The Australian Mist, a Sociable and Meowing Cat