What is Catnip and Why Does it Make Cats Crazy?

Catnip is known to cause intense reactions in our feline pets. But, what is catnip and why does it make our cats go crazy? 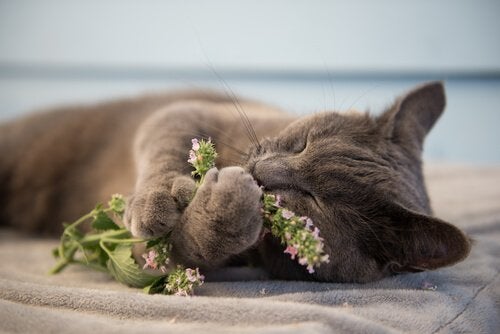 Catnip is a toy or a snack for many cats. Not all cats react to it the same way, which isn’t surprising because cats are so unpredictable. However, in general, a large majority of felines love this plant; it’s like a fetish of theirs. So, let’s take a closer look and answer the questions: what is catnip and why is it so popular among cats?

Its scientific name is Nepeta cataria. This plant is an evergreen that’s part of the same family as mint, and it can reach up to three feet in height. The main reason that it attracts cats is the action of the chemical compound nepetalactone. This chemical is found in the leaves and buds of catnip.

This plant, originally from Europe, owes its name Nepeta (which in Latin means scorpion) to the widespread belief that this plant worked as an antidote against scorpion stings.

Cats often rub up against it, smell it and nibble it. That’s because the nepetalactone in catnip can provoke a burst of energy in cats. It’s similar to what humans experience with LSD. The effects of this herb usually last about 10 minutes.

How do cats react to it?

Like we previously mentioned, the effects of this plant are similar to those caused by LSD in humans. Cats that are under the effects of catnip will start to show erratic and impulsive behavior, but only if they smell it.

When a cat actually ingests the plant, it will have the opposite effect. It’ll act as a powerful sedative that will leave your pet out for the count for longer than his usual nap. In fact, humans can also use catnip to help them sleep better.

However, not all cats are affected by it. In fact, it’s estimated that only 50% of the feline population find this plant exciting or even remotely intriguing. A helpful tip: you should only give catnip to cats that have reached adulthood. Kittens who are only a few months old don’t usually react to it.

Toys and accessories with catnip

An overexposure to catnip will end up desensitizing your pet to its effects. Some occasional exposure, however, can brighten your cat’s day and get him to act a little funny.

Cat Scratchers: Why Isn’t My Cat into Them?
If your cat doesn't care to use scratchers, then they might be more attracted to your furniture and/or other valuables items in your home. Read more »
Link copied!
Interesting Articles
Cats
What's the Origin of the Persian Cat?