Why Don't Cats Drink Much Water?

Cats don't drink much water in comparison to other animals. Do you want to know why? We'll tell you all about it in this article. 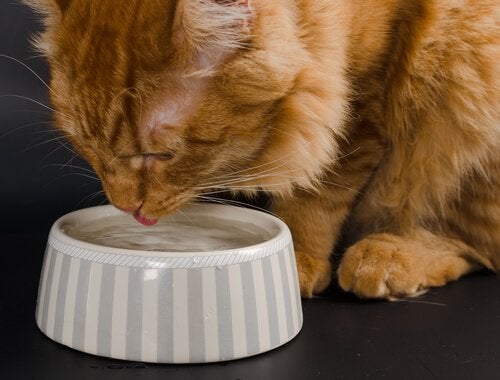 If you’ve got lots of different pets at home, you’ve probably noticed that cats don’t drink much water in comparison to other animals. And when they do, they usually seem to prefer drinking straight from the faucet. Would you like to know why? We’ll tell you all about it in this article.

There are two unusual things about cats and water. Firstly, they don’t really enjoying bathing, or even getting damp. Secondly, they don’t drink as much water as other animals, such as dogs. This is because the origin of our feline friends has actually altered their metabolism.

Our feline friends’ ancestors lived in desert regions, areas where a lack of water was commonplace. Because there wasn’t much water to drink, they got most of their water from the prey they ate.

The same goes for today’s domestic cats. Their water intake is reduced because they are accustomed to only needing small amounts. Because they are obligate carnivores, they drink relatively little water, and get their energy from the protein in meat (or pet food).

Other animals (including humans) get energy from fats and carbohydrates instead, so they need to drink more water.

How much water do cats drink?

The amount of liquid a cat needs to drink every day depends on several different factors, such as weight, size, age, the level of physical activity they do, the time of year, and even the type of food they eat (i.e. whether it’s wet or dry).

It’s recommended that they should drink between 1.5 to 3 fl oz every day. Encouraging your cat to drink water is important for its health and digestive system. If your pet doesn’t drink enough water, the kidneys won’t be able to filter out toxins. This can eventually lead to renal insufficiency.

Wet food is a great option for cats that don’t drink much water. You can alternate it with dry food to offer them a bit of variety.

We often give our cats a huge bowl of water to drink from, and then find that they prefer to get their water from elsewhere, such as the sink or shower. Rather than simply drinking from a full bowl, they often spend hours waiting under the faucet for a single drop of water.

Cat owners know that cats are one of the cleanest animals in the world, and can often be demanding when it comes to their food and drink. As a result, you might find they dislike drinking from a bowl, and would rather drink water fresh from the faucet.

Plus, if you use a metal bowl, it can often give the water an unpleasant, metallic taste. If that wasn’t enough, on some level, cats actually understand that stagnant water can contain bacteria, and avoid drinking it wherever possible.

Some solutions include buying a special cat drinking fountain which keeps the water flowing, or putting the water in a ceramic or glass bowl. You could also place several bowls around the house, especially in the rooms they spend the most time in.

Remember, cats are pretty lazy animals, and make as little effort as possible. If the bowl is too far away, they’d probably choose to go thirsty rather than get up.

Finally, we would recommend keeping the water bowls and the food bowls in separate places. In the wild, cats drag their prey away from rivers and lakes so as not to contaminate the water. Domestic cats have a similar instinct.

The Curious Way that Cats Drink
Unlike dogs, cats drink in an elegant way and never get dirty. In fact, the way cats drink is so curious, that some people have studied it scientifically. Read more »
Link copied!
Interesting Articles
Cats
Learn All About the Asian Smoke Cat