Find Out Why Cats Move Their Water Bowls Before Drinking

Cats usually have some behaviors that humans consider curious or strange. One of them is moving their water bowls, often spilling its contents as a result. 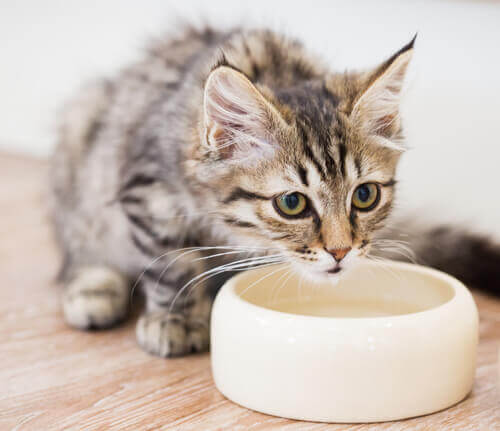 In this article, we’ll tell you about the different theories that try to explain why cats move their water bowls before drinking.

Why cats move their water bowls

You may have never noticed your feline friend pushing his water bowl from one place to another. But if you spend a lot of time with these animals, then it’s very likely that at some point you have noticed this unusual behavior. However, it does usually occur more often in kittens.

In general, the cat begins by scratching at the water with his front paw. Then, he proceeds to move the bowl, spilling some of the contents.

Among the existing theories to explain this behavior, there is one that seems to make the most sense. It claims that when a cat moves his bowl, he is looking to make waves in the liquid. As a result, he can establish the water level. That way, he won’t get a wet nose when he puts his head near the bowl. The reason for this is that cats have difficulty focusing on nearby objects.

So, if he has ever dipped his nose in once, then the next time he will look for a way to avoid doing this. And that’s why cats move their water bowls: to avoid making the same error twice.

Cats’ eyes are optimized to see in twilight or semidarkness. Their night vision is between 6 and 8 times better than ours. We might look for the reason in their ancestors, who had to adapt to hunting at night to get the food they needed.

In addition, our furry friends’ eyes are larger in relation to the size of their heads than those of humans. This also facilitates night vision. But — and there is always a “but” — it makes it difficult for them to focus at short distances.

Cats cannot focus on anything that is less than 30 centimeters away. For this reason, they must look for other ways to find out the water level in their bowls.

There are also other theories going around to explain why cats move their water bowls before drinking. These are:

In addition, it is often said that some breeds of cats — the Norwegian Forest or Maine Coon cats, for example — retain the instinct to clear the water surface of leaves or insects or to break the layer of ice that would cover it in the cold regions where they originally lived.

Nothing or no one in this life is perfect. So, if you have one of these mewling, furry friends, maybe you should get used to the floors where you keep his bowl being a little wetter than the rest of the floors in your home.

At the same time, if you think that your cat’s behavior is outside of the norm, you can consult your veterinarian to rule out any illness.

If he gets the all clear, then just relax and enjoy watching your cat move his water dish with his paw. It may even help you to reduce your daily stress levels!

Can My Pet Drink Any Type of Water?
Can a pet drink any type of water? Keeping the water in a cool place and keeping it clean is even more important than the type of water an animal drinks. Read more »
Link copied!
Interesting Articles
Tips and Curiosities
Why Your Dog Licks the Floor