The Characteristics of the Australian Shepherd Dog

Australian Shepherds were sought by American farmers and cowboys when their official breed registration began. 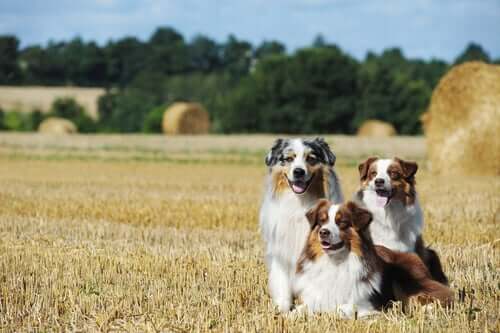 The Australian Shepherd breeds originated in Asturias and the Basque Country (Spain) but migrated to the land down under together with the European migrants. They truly thrived in terms of development after they got there, though … In today’s article, we’re going to tell you all about a breed of dog that’s often used for herding and is also well-known for its keen intelligence.

The Australian sheepdogs who shepherd sheep

As we said above, the Australian Shepherd didn’t originate in Australia, even though their name seems to indicate otherwise; however, it’s definitely an excellent sheepdog. The origin of the breed took place in Spain, went through the USA, and then continued towards Oceania.

Their story begins between the 19th and 20th centuries when a group of people migrated from the Iberian Peninsula to the North American West Coast. These people took their dogs along so they could help with the sheep. Later on, they took them to Australia, where they also used them for sheep herding.

This breed can easily adapt to extreme and work as much as they have to. So, no wonder locals immediately embraced them. The proliferation of their population was soon visible as you could spot them in most fields.

The Australian Shepherd is a medium-sized animal that usually weighs up to 70 lbs. Their body is quite solid, and their coat long and multicolored. Their belly is usually white and so are most of their legs. They also have spots in other colors such as black, brown or gray.

Many specimens of this breed have light blue eyes and it earned them the nickname of “ghost eyes dog.” In some cases, their eyes are of different color and their irises can also be two-toned.

The tail is another distinctive feature of the Australian Shepherd. It can be short or long, although in the latter case people often opt for docking it. Fortunately, this practice is no longer acceptable.

This kind of dog is highly energetic, just like other working breeds and they like to be busy at all times. The Australian sheepdog does very well in agility course tests and can spend hours playing with their owner (they love playing catch).

In addition to being employed in the field of sheep herding, people also use this breed for rescue, search, detection, guidance, and even therapy. But, above all, they’re excellent family pets.

The Australian Shepherd requires moderate to intense daily exercise, has great instinct, and is quite obedient. They usually just need a plain “no” to stop whatever they’re doing. They can be somewhat territorial around other dogs.

However, this dog is very kind, affectionate, and loyal around people. They’ll protect property without fear, although they’re no barkers. This animal can stay alert all night if necessary and growl as soon as they detect danger.

They learn very fast and seldom get bored because when they’re not working or playing, they’ll think of a fun way to spend their time. This is why they must have enough space to run around, which is easy when they live in rural areas.

Australian Shepherds are highly intelligent so it’s quite easy to train them when they’re young. In addition, this is the kind of dog that’s always happy-go-lucky, just like a puppy. They don’t maintain the destructive part, only their joy and their desire to have fun and play. This kind of animal will be rather attached to their owners and will follow them wherever they may go.

Though long, their coat requires minimal maintenance so you’ll just need to brush them twice per week to remove any loose hair. It may come in handy to know that this breed loses a lot of hair, especially at certain times of the year. Also, don’t bathe them unless they really need it.

These dogs require a lot of activity and aren’t suitable for apartments, small houses, or a lonely life in the yard. They thoroughly enjoy outdoor activities with their families. In fact, there are owners who stimulate their intelligence using games.

This sheepdog is prone to some breed-related diseases such as hip dysplasia, cataracts, eye abnormalities, nasal dermatitis from the sun, and epilepsy, among others. Breeding between two speckled specimens such as gray and black speckled mosaic or off-white and deep red can result in deaf or blind puppies.

The Icelandic Sheepdog: Behavior and Characteristics
The Icelandic Sheepdog has become a symbol for Iceland. We'll tell you everything you need to know about this amazing dog breed! Read more »
Link copied!
Interesting Articles
Dogs
The Bergamasco Shepherd Dog Breed of the Italian Alps