This sheep dog establishes a strong relationship with humans without becoming very dependent. 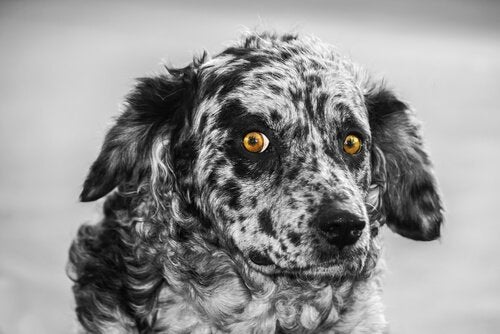 The Carea Leonés is a sheep dog from the northern Castile and León in Spain. Similar to other sheepdogs such as Border Collies, this breed is no that known but is very beautiful and well-behaved. The Spanish Royal Canine Society recognizes the Carea Leonés as an indigenous breed.

Traits of the Carea Leonés

The Leonese Sheepdog — which is another way to call this breed — has several coats or fur patterns, but the most common is the harlequinade. This pattern consists of different variations of black, white, and gray. It’s worth mentioning that there are also fawn or brown-gray harlequinade patterns.

The black fawn color with the deep black coat and additional markings are also common. This pastoral breed has no self-selected restrictive colors. Plus, this breed’s coat is short to medium length.

When it comes to its physical abilities, the Carea Leonés is greatly adaptable, strong and resistant. It’s a medium-sized breed with a long head and dark eyes. In some cases, there are blue streaks in the irises (especially dogs with polka dot coats). This dog’s tail its saber-shaped, and its bones are strong and sturdy.

The breed in general is very obedient, but difficult to train. It requires a lot of activity and is naturally excitable and active. The animal establishes a strong relationship with humans, but it doesn’t become dependent on its owner. In addition to being a playful breed, its behavior is based on pure instinct.

Therefore, Carea Leonés are not well-suited for apartments or homes. They’re best off working. While they could be good companion pets in rural or urban areas with a garden, they require long walks and stimulating activities.

Origin and aptitude of Carea Leonés

The exact origin of this breed is unknown. Ever since sheepherding become popular centuries ago, shepherds all across Spain have relied on certain dog breeds to manage their flocks. It’s difficult to come up with the origin of the Carea Leonés regarding a specific area of Castile and León. However, they’re mostly found in the province of Leon, as well as in Zamora and Valladolid.

Therefore, they’re most suited to manage large herds of sheep. Given the reduction in the amount of sheep-herding happening in today’s cattle ranches, their use is becoming less common. Thus, new uses for the breed are being explored, potentially as search and rescue dogs.

In recent years, breeders are hoping to find a place for the Carea Leonés in the 21st century. Several regional projects have tried to get this breed involved in sports and dog shows, or train them in detecting drugs or explosives. However, most of those projects require funding to prevent the disappearance of the breed.

Fun fact: one famous example of the Carea Leonés can be seen in the famous movie Kingdom of Heaven. Actor Viggo Mortensen, who loves the region of Leon, was presented along with a Carea Leonés puppy.