Four Types of Poodles and Their Characteristics

Poodles are friendly dogs that are highly valued for their aesthetics and intelligence. Today, we'll take a look at four types of poodles and their characteristics. 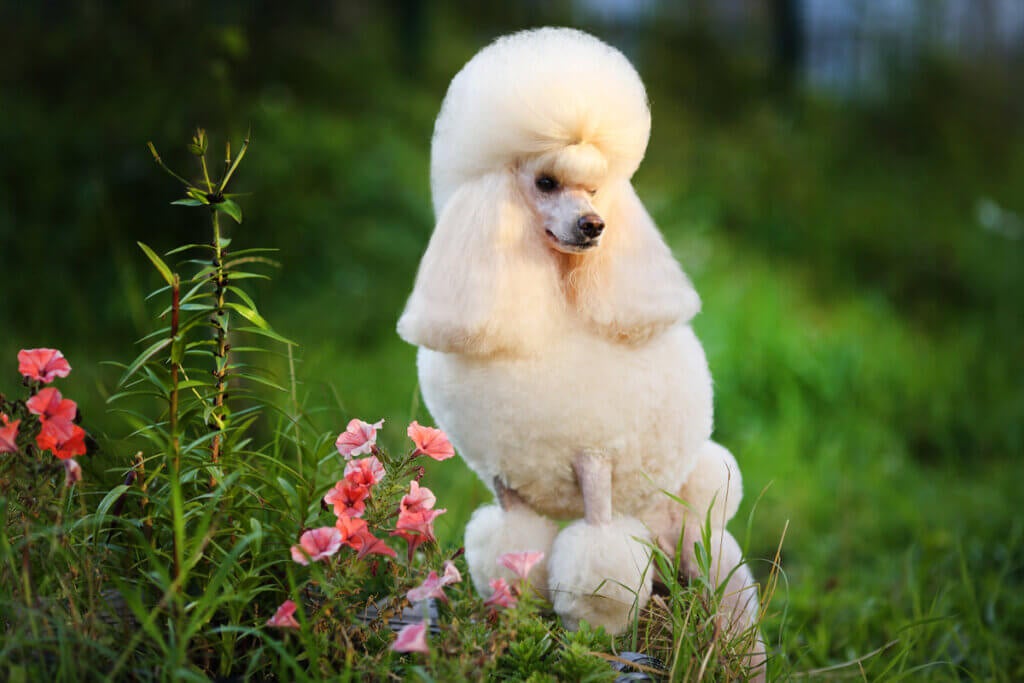 Poodles are widespread throughout the world. Their curly hair is the most characteristic feature of the breed, but it also differs from other dogs because of its size. Officially, there are four types of poodles: big, medium, miniature, and toy. Each of these types can have different colors, but the pattern is always solid, without spots or shades.

From hunting to beauty contests

Originally, poodles hunted water birds such as ducks and geese. It comes from the French Barbet, a breed of water dog it retains many characteristics from.

There are written records of the Barbet since the 16th century in France. And, according to records, it was a retriever of prey that fell into the water. Later, its breeding led to the poodle. In fact, in 1743, they spoke of this dog as if it were a female Barbet dog.

With time and selective breeding, the Barbet and the poodle developed into different breeds. Breeders looked for uniform color in poodles. In fact, the tone, shape, and cut of the coat is a very important requirement in beauty contests.

The beauty and intelligence of these dogs made them very popular as pets, allowing them to reach the royal court of Louis XVI. Poodles appear in numerous works of art by such renowned painters as Francisco de Goya.

In the 19th century, the dog stylists who created the different cuts we know today for this breed became popular. However, some of these styles have little respect for the underlayer of hair, whose function is the thermoregulation of the animal.

In general, this breed has always been associated with very rich or aristocratic people.

Until the 20th century, the giant poodle predominated. However, the rest of the varieties have been growing and have official recognition of the International Federation of Cinecology (FCI).

Its friendly, cheerful, and loyal character, its four sizes, and its different colors have helped this breed reach the homes of all kinds of people.

Requirements to be a poodle

The main difference between the varieties is their size. The standard characteristics can be more or less defined, but they all look very similar.

For example, the hair is curly and, in general, coarse in texture, and may form tufts. What’s more, it can be white, brown, black, gray, or fawn. The constitution of the poodle is harmonious and reflects elegance and nobility, its length is slightly higher than its height. They’re muscular dogs, but slender and well-proportioned.

A sought-after characteristic in this breed is the length of the muzzle, which is approximately nine-tenths of the total length of the skull. The head is straight in proportion to the body and, seen from above, the skull is oval in shape and slightly convex in profile.

The ears are long, flat, and rounded and are covered with very long wavy hair. The tail has a fairly high implantation.

The styling of poodles: types of haircuts

Mastering poodle haircuts isn’t easy and some of these styles are the ones we see in beauty contests. Poodle hair care is very important.

These are some of the most common in the breed:

After this lesson of history and style in the poodle world, we’ll tell you the four varieties that make up this beautiful breed.

The four types of poodles

This is the largest variety of all, as its height exceeds 18 inches and can reach 24 inches. It’s an enlarged version of the medium size poodle.

Poodles are one of the most intelligent breeds in the world and occupy the podium of canine intelligence.

Its height at the withers is between 14 and 18 inches. It’s the standard version of the breed, since the rest are the result of crosses between large or small specimens of this variant in order to achieve the giant, miniature, or toy size.

The miniature poodle is a reduced version of the medium one. It maintains the same proportions as the medium poodle, with a height of between 11 and 14 inches.

This variety and the toy type are very popular in small homes because of their size. However, in spite of this, the poodle is still an agile and active breed that needs daily exercise to stay healthy.

Its average height at the withers is 10 inches. The toy poodle also retains all the characteristics of the standard poodle look. It has become the most popular variety in recent years for its practical size and friendly behavior.


As we’ve seen, there are several types of poodles, but all of them share two essential features: a friendly character and incomparable beauty.
What Is Genetic Selection in Domestic Animals?
The function of each domestic animal is the result of genetic selection. Find out more about this concept in today's article. Read more »
Link copied!
Interesting Articles
Dogs
The Tosa Inu: A Perfect Mix of Europe and Asia