The Norwegian Buhund is one of the earliest examples of a wolf-dog cross and originates from the peat bogs of Norway. Find out more about this beautiful and noble breed. 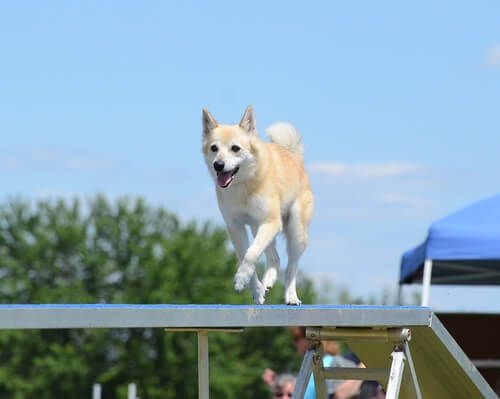 The Norwegian Buhund, also known as the Norwegian Sheepdog, is a native dog from Scandinavia, and, in particular, Norway. It belongs to the Spitz family and is closely related to the Icelandic Shepherd and the Jämthund. It’s considered one of the oldest dog breeds in Western culture.

This breed’s origins call to mind the various myths about wolf dogs. According to the story, the first Buhunds came about as a natural cross between the wolf dogs from the peat bogs. It’s also believed that they were already known to the Vikings, given the references to them in Norse mythology.

This particular breed would have been the first example of a wolf-dog cross. Historical records suggest that the dogs of the peat bogs began to accompany men living around the Nordic lakes more than 10,000 years ago.

It’s assumed that the Norwegian Buhund has preserved its appearance and characteristics over the centuries, despite having first appeared about 6,000 years ago.

The Norwegian Buhund: the oldest companion in Scandinavia

The Norwegian Buhund stands out for many reasons. The ease with which it adapts to living with humans is remarkable, to such an extent that its own evolution has run parallel to the evolution of human beings.

Their genetic heritage is markedly derived from the wolf and stands out because of:

Their name already gives a clue as to their purpose. The word “Buhund” is derived from the word “bu”, which in Norwegian, means “farm”, “rural shelter” or “mountain shelter”. So, its name refers to the place where shepherds or countryfolk would have lived.

An animal for working with livestock

The Norwegian Buhund is effectively the Norwegian Sheepdog. Throughout its history, it has worked herding livestock or guarding property and children.

For many years, it had a reputation as just a country dog, and this led it to the verge of extinction during the periods of radical change in Scandinavia following the industrial revolution.

It was only in the 1920s when incentives were put in place to protect the breed and stop it from disappearing altogether. At this point, there were very few specimens remaining in Norway.

Today, you can find examples of the Norwegian Buhund right across Europe. They continue to work in the fields and make excellent guard and protection dogs. They have also been very successful in Australia, where they are one of the dogs of choice for farmers.

What are the Norwegian Buhund’s main features?

The standard Buhund is medium-sized and strong, with a boxy, robust and athletic build. Their nose is pointy and very wolf-life in appearance and they have a defined head with pointed, erect, furry ears.

Their abundant fur, which consists of two layers, prevents them from losing too much heat in the cold environment. As a result, they adapt to cold environments very easily. However, they can develop health and behavior problems if exposed to very high temperatures.

The outer visible layer of fur is long, thick and shiny and can be cream, wheat, or black in color.

Male Norwegian Buhunds are between 17 to 18.5 inches tall on average, while females measure between 16 to 17 inches. Their weight varies between 31 and 40 lb for males and 26.5 and 35 lb for females.

They can live for around 12 years and most of their specific health care relates to their and skin. It’s important to keep their fur very dry so as to avoid a build-up of moisture and create a breeding ground of microorganisms.

Some Norwegian Buhunds may develop hip dysplasia when they get older, particularly those with tougher jobs.

Their character is generally that of a hunter and a farmer. This means that they need intense training to manage their instinct and to perform more complex tasks. They’re very energetic and need plenty of space to run around in. They also adapt well to children.

The combination of the Norwegian Buhund’s temperament and noble nature, along with its beauty, truly makes it a fascinating dog.