The Icelandic Sheepdog: Behavior and Characteristics

The Icelandic Sheepdog is sociable and intelligent, as well as a strong breed capable of herding flocks. 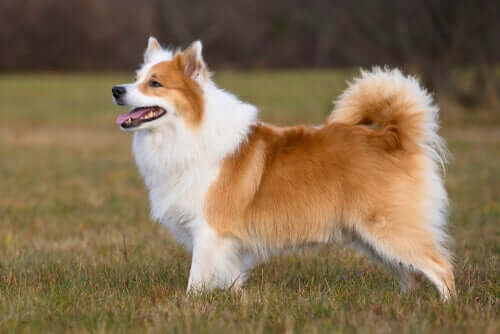 The Icelandic Sheepdog is the only breed native to the island that gives it its name, Iceland. Its origin goes back to the Vikings. Both in the past and present, this breed has been linked to herding.

What is the origin of the Icelandic Sheepdog?

Experts suggest that the first Viking settlers from Norway and Sweden introduced the Icelandic Sheepdog to Iceland. This breed has always stood out for its toughness, ability to adapt to the terrain, and the ability to manage the herds.

As a result, in the Middle Ages, this breed spread through the northern regions of Europe and the United Kingdom. Unfortunately, there were a series of disasters in the eighteenth and twentieth centuries that almost ended the breed. Since then, experts have taken measures to preserve the breed.

These dogs have hardly undergone any changes or been a part of any crossbreeding. This is why some authors even consider them as  ‘species’ separate from the rest: Canis islandicus.

Characteristics of the Icelandic Sheepdog

The Icelandic Sheepdog is a medium-sized dog, between 15 to 18 inches tall and weighing up to 30 pounds. They have ears that stand up and a curly tail. The robust body is covered with a thick double coat, which protects them against the harsh weather conditions in Iceland.

The color of their coat is varied, however. It can be brown, gray, or black. The color is also always accompanied by white coloring, either on the chest, the tip of the tail, or some part of the neck or face.

You should know that the Icelandic Sheepdog is sociable, playful, and enjoys the company of humans.

Their toughness, agility, and intelligence make them an ideal choice to manage herds. They are always alert, and are very helpful for herding in meadows or mountains.

In Iceland, people consider them prized dogs so it’s also common to see them as pets. Without a doubt, the Icelandic Sheepdog has become a symbol of the country.

The Swiss White Shepherd: Beautiful and Smart
This breed was not recognized until 2011 and is originally from Germany, despite what its name suggests. These are medium sized dogs, muscular and corpulent, in addition to being vivacious, hardworking and easy to train Read more »
Link copied!
Interesting Articles
Cats
What's the Origin of the Persian Cat?