Home » Breeds » Dogs » Spitz Dogs: All You Need to Know

Spitz Dogs: All You Need to Know

Spitz Dogs originated in Northern Europe and are one of the oldest types of dog. Their distinguishing characteristics are their pointed ears, their curled tail and their double layer of fur. 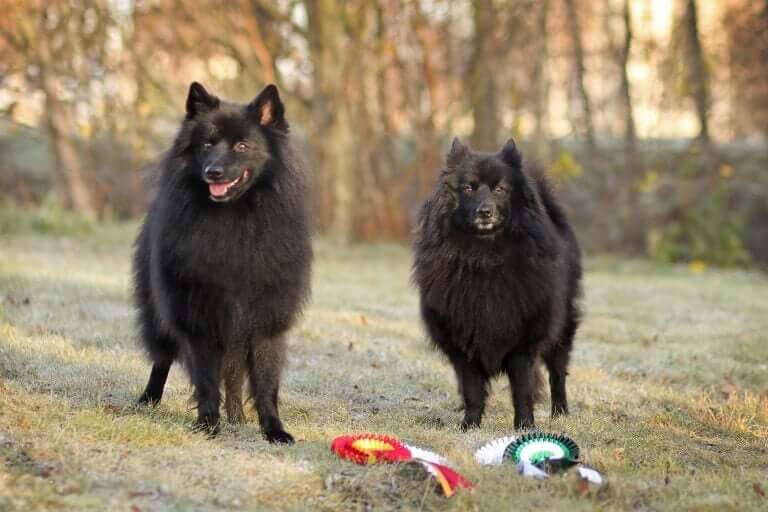 With their pointed ears, curled tails and thick fur, Spitz dogs are very good-looking breeds. This article will explain all you need to know about this type of dog and its striking similarities with wolves.

According to the World Canine Organization (or FCI according to its French acronym), Spitz dogs originated in Germany and are direct descendants of wolves. All sub-breeds of this type of dog share similarities. In fact, their size and the color of their fur are their only distinguishing features.

For example, Spitz dogs commonly have a large snout, black eyes and nose, and straight, triangular ears. Their fur has two layers, one internal and one external. In addition, their tail curls upwards and rests on their back.

In terms of their behavior, Spitz dogs are very happy and energetic. They always remain devoted to their owners and they get on well with other pets and with children. Spitz dogs do bark a lot, so they would make good guard dogs, but they’re not used as working protection dogs.

Dogs of the Spitz family have a number of key characteristics. They fall into three main groups: European, Asian and Nordic dogs. Some of the different breeds are:

This breed is the father of all Spitz dogs, given that other breeds are descendants of the German Spitz. Experts think that these dogs first appeared in central Europe during the Stone Age. As a result, the German Spitz is the oldest dog breed around.

The fur of German Spitz dog, a picture of which appears at the beginning of this article, can vary in color. However, it’s usually golden, beige or white. Similarly to other Spitz dogs, this breed has a double layer of fur. Dogs weigh around 44 lbs and measure up to 22 inches.

The Keeshond is a medium-sized dog with a thick, plush coat of two or three colors, such as brown, black, white and gray. They weigh around 66 lbs and measure around 20 inches.

Thee Keeshond originated in northern regions of the Netherlands, but it “came to fame” in Germany in the 18th century. However, it wasn’t until the French Revolution that we began to see the dog as we know it today. Since then, it has been considered a companion dog.

The Pomeranian is probably the most famous Spitz dog. Due to its small size, it’s considered a “toy” dog. The first Pomeranians originated from Lapland and Iceland, but they later traveled to Poland pulling sleds.

Pomeranians have a triangular, foxlike head, small triangular ears and a tail that curls over their back. This breed again has a double layer of fur and can easily overheat during the summer. They are an active breed that adapts well to either city or countryside life.

This breed originated from Japan and is quite similar to Samoyed dogs, originally from Russia. This is mainly because of their fur, which is entirely white, their curled tail and their triangular ears.

Japanese Spitz dogs are very intelligent, loyal and attentive to their owners. They make excellent pets. They adapt very well to family life and, if you ensure they socialize from when they’re young, they get on very well with other dogs. Japanese Spitz dogs love to run, but they don’t need a lot of exercise. If you want to get involved in dog agility, then these are the dogs for you.

This is a slightly less “fluffy” breed of dog, although it does share a number of typical Spitz characteristics. These include a tail that curls upwards, a large snout and triangular ears. Their fur is clear brown or reddish colored.

The Finnish Spitz dog was bred for hunting rodents and squirrels, and even nowadays it is still used as a hunting dog. This is a stubborn, but also a curious and playful breed. These dogs can be aggressive towards other dogs and need long walks every day.

Other Spitz breeds include the medium and small German Spitz, the Volpino Italiano, the Eurasier, the Hokkaido, the Norwegian Elkhound and the Norwegian Lundehund.