Movies To Watch With Your Dog 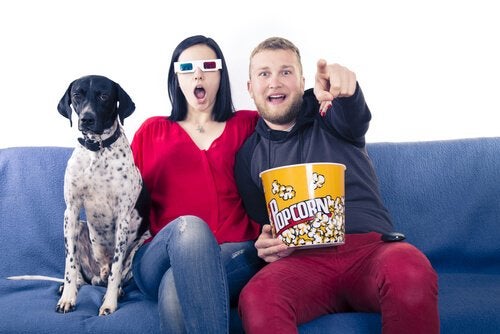 If you think that your pet needs a little motivation, then what would be better than taking them to the cinema? This is certainly an activity that most humans like. In this article, you can take a look at a list of the best movies to watch with your dog.

It first appeared on the big screen in 2009. Viewers have considered it as one of the most impressive movies they had ever seen. It’s based on the fidelity an Akita had towards his owner. Without a doubt, it’s one of the best movies to watch with your dog. You’ll be thrilled with this incredible true story.

Lassie, one of the best movies to watch with your dog

This is a classic in the world of cinema. Originally written as a book, the protagonist of the story is an adventurous female collie. This film first came to theaters in 1943 and it’s about the story of a family that must sell their dog because they are lacking financial means to survive.

The story takes place before world war II and it still brings people to tears today. There have been several remakes of the film, the most recent was in 2005. It’s an excellent option to spend some good quality time with a great friend like your pet.

This husky-wolf mix was another celebrity that captivated half the planet.

This is a very emotional and touching story that first came to theaters in 1973. It’s a beautiful movie to watch at home with your dog while eating some popcorn and dog treats.

Another excellent option: Turner and Hooch

This film stars Tom Hanks and a great bulldog from Bordeaux and has captured the hearts of everyone that has seen it. It’s a story about the two having to share time and space together while they are on an incredible adventure. It’s another ideal movie to enjoy with your friends and family. Especially with your most loyal friend, your pet!

Air Bud is a movie from the 90s. It about the story of Josh who’s going through some tough times in his life until he meets an abandoned dog. He’s a golden retriever who turns out to be a star on the basketball court and also helps improve the protagonist’s life.

It’s a beautiful story of love, companionship, and fidelity. It first premiered in 1997, and there were many sequels thanks to its huge success in the box office. That’s why it’s another great film to watch with your dog.

This film was released in 2008 and was a worldwide success. It’s a mix of comedy and drama. It tells the story of Chloe, a small chihuahua that gets lost and separated from her owner.

The movie showcases the thousands of street adventures that both protagonists live during their intense search. This chihuahua loves everyone and this is one of the best movies to watch with your dog.

Another successful movie is Marley & Me. It’s a beautiful tragedy that stars Marley, a tan-colored labrador.

A newly-wed couple gets Marley to test if they’re ready for children. This charming and emotional story will steal anyone’s heart that watches it. So, it’s a great movie to watch with your pet, especially it can help you remember how important your own pet really is to you.

Amores Perros is a classic Mexican movie that shows an exciting, strong, and emotional story. It’s an ideal film to make sure your dog values the home, food, and the love everyone gives them.

We recommend that you don’t watch this movie with your dog if he’s still a puppy or is very sensitive. Aside from that, it’s a great option for a movie to watch with your pet.

Beethoven, a member of the family

This is a fun and exciting story of the famous Saint Bernard who escapes being kidnapped from a store. He ends up hiding in a garbage bin and then wakes up in the house of his dreams: a house with a family that will make him the happiest dog in the world. The dog winds up going on a wonderful adventure that you’ll definitely enjoy watching with your dog.