These dogs are the result of crosses between traditional breeds. Because they haven't been around long, they are yet to be recognised by the International Cynological Federation. 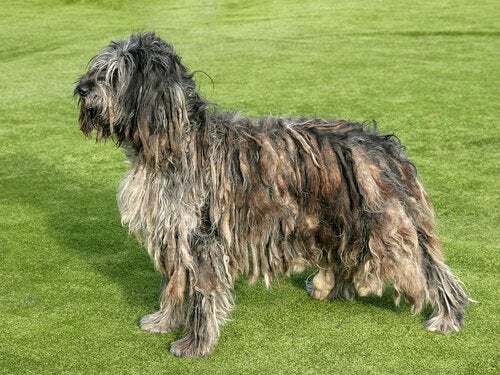 Some breeds of dog have been around for centuries… but others have only existed for a few generations. The new dog breeds that you’ll find in this article are some really interesting crosses. Which do you like the most?

Which new dog breeds are there?

They’ve not yet been recognized as breeds or registered in the International Cynological Federation (FCI), much less do they claim to have “pedigree” for many decades. These new dogs have been around for a very short amount of time and are each a cross between two existing breeds.

This breed originally comes from the Italian Alps and is used as a shepherd dog. Once you get a closer look at it, it seems very similar to a Hungarian dog called a Komondor. They have unique hair that looks like it has black, grey or brown dreadlocks, which is easier to care for than you might think. You only need to bathe them three times a year!

The Bergamasco Shepherd (in the picture above) is a very patient, intelligent, and determined animal that’s always alert. They can live for up to 15 years and needs a lot of exercise on a daily basis. If you have children at home, there is no need to worry because these dogs are great with them and other pets.

What do you get if you crossbreed a Siberian Husky with a Golden Retriever? Well, a beautiful animal of course! The Husky has their amazing ears and wolf-like appearance, while the Retriever is considered to be the best pet for children because of their docile and friendly nature.

The Goberian has white fur with black, brown, and grey patches, light eyes, and the same face as a Golden Retriever.  They also have cute ears that droop backward, and a medium-sized snout. Some examples can also have completely cinnamon-colored coats like a Retriever.

It’s currently one of the most popular new dog breeds, especially because they’re progenitors are so completely different. Dalmatians are medium to large-sized dogs, whereas the Dachshund is much smaller.

The outcome is a combination of the small body of a Dachshund (long with short legs) and the spotted coat of a Dalmatian. However, instead of having a white coat with black spots, the spots come in several shades of brown or grey. These dogs are very playful and restless like the two breeds that were used to create them.

This is one of the more unique new dog breeds and they are another cross between a large dog and a small one. The Pomsky is the result of a crossbreeding a Pomeranian and a Siberian Husky. It’s one of the most popular new dog breeds because of their small size, which means they can adapt easily to living in an apartment.

This breed looks like a teddy bear, especially when they’re a puppy. They have a thick coat like a Husky and often they have the Husky’s famous blue eyes. The largest examples of these dogs can weigh up to 15 kilos.

This is cross between a Yorkshire Terrier and a Poodle. They are adorable pets that you can take anywhere because they’re so small. The Yorkipoo is so pretty and obviously popular among celebrities.

This breed has thick, woolly fur like a Poodle and a small, compact body like a Yorkshire Terrier. Their fur is hypoallergenic, so it won’t be a problem for people who have allergies. The Yorkipoo is a very playful, intelligent dog that stays close to their owner. They love to stay at home, on the sofa or the bed if possible.

There are other new breeds of dog that have resulted from some strange crosses: the Shepherd Pei (Shar Pei and German Shepherd), the Chow Shepherd (German Shepherd and Chow Chow), and the Pembroke Sheltie (Corgi and Sheltie) are just some examples.