French pointers are a hunting breed from France. In fact, they have been around since 1700. Keep reading to find out more about these dogs. 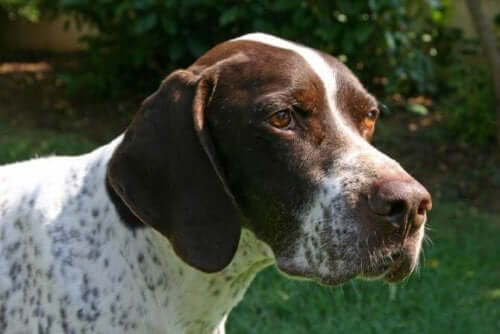 In this article, we’ll talk about French Pointers. In fact, lots of people confuse them with the Gascogne type. To clear up the confusion, we’ll tell you more about this breed in this article.

What you should know about French Pointers

We don’t know exactly where this type comes from since it existed before people recorded breeds. However, what we do know is that it’s a hunting breed from France, and it dates back to the year 1700 AD.

Apparently, people believe that, unlike the Braco de Gascogne in southern France, the Pyrenean French Pointer could be related to other European breeds. For example, it may be related to the English Pointer and the German Pointer.

The earliest reports of them come from the 17th century. Selincourt, a hunter, described them as “tall in size, strong build, large head with long ears, square muzzle, large nose, hanging lips, and brown and white fur.”

At first, there was only one type of pointer. However, in the 1800s, hunters started to mix with other breeds. Then, the French Pointer emerged. It’s a smaller animal, but with very similar characteristics.

At first, people thought they were the same breed, so crossbreeding was normal until researchers identified the individual breeds. At that point, hybridization was already prohibited. In addition, the world wars almost made the breed disappear, but then they made a comeback.

Tight lips, a wide head and a wide, brown nose are common characteristics. In addition, French Pointers usually also have hanging ears. Regarding their hair, it’s short, fine and soft over their whole body, and they are usually all brown or brown and white. However, there are some dogs that were born with other colors.

Despite being hunting dogs, they’re affectionate, loving, and loyal companions. They’re very dedicated to their family and love to help. Additionally, they want to feel love because they tend to get sad when they’re lonely.

If you socialize them correctly from a young age, they’re a great pet for children. They aren’t reserved around strangers, but they can be shy or nervous. Therefore, it’s important to socialize them well as puppies.

They’re great dogs to train because they aren’t dominant, and they’re obedient and intelligent. Although they were hunting dogs, they were never trained to harm birds. On the contrary, they were trained to chase them. Therefore, even as pets, they will chase other small animals, but they won’t hurt them.

French pointers are very active dogs, so they will need lots of exercise. In fact, they need about 45 minutes to an hour a day. They’re great companions for running or biking. However, there are several common conditions for this breed, such as:

Either way, French Pointers are great dogs to keep as a pet!

All About the Auvergne Pointer Dog Breed
The Auvergne pointer makes for skilled hunting dog as well as a caring and affectionate pet. Find out more about this breed in today's article. Read more »
Link copied!
Interesting Articles
Dogs
Bulldog Breeds: History and Traits