Today, we want to tell you all about the German Shorthaired Pointer, a hunting dog that dates back to the 18th Century. 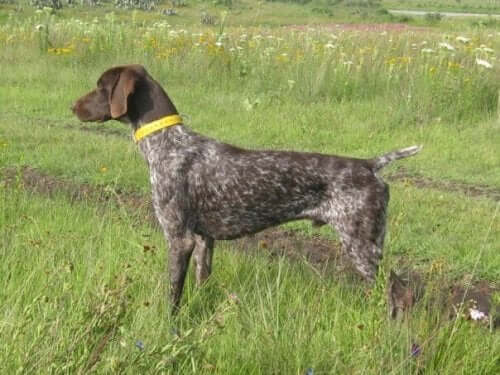 The German Shorthaired Pointer is a versatile hunting dog that’s highly valued for its proud bearing and physique. The World Canine Organization (FCI), the body responsible for the registration and classification of breeds, classes them as Pointers – as the name suggests. In this article, we’ll find out more about these active animals.

The origins of the German Shorthaired Pointer

While the history of the German Shorthaired Pointer is fairly unclear, it’s believed that they’re descended from the German Bird Dog. When other breeds began arriving in Germany from the Mediterranean, there came a need to find an all-purpose breed.

Traditional Pointers present at the time – that were trained to find and point at prey – weren’t enough. The most highly-prized hunting dogs were those that were able to snatch birds out of the air, and then bring the kill back to their masters. The invention of the two-barrelled shotgun in 1750 further increased the need for a more versatile breed.

As a result, Prince Albrecht zu Solms-Braunfels decided to lay the groundwork for the official recognition of the breed. He even wrote one of the most important documents on them, “The Origins of the German Shorthaired Pointer”.

The German Shorthaired Pointer is an athletic and well-balanced dog. They have strong, well-defined muscles which are ideal for intense physical activity and long days hunting. Thanks to strict breeding regulations, they’re often able to continue hunting to an advanced age. The most common colors for this breed include:

German Shorthaired Pointers have strong, muscular backs, a deep chest and powerful hindquarters. They have medium-length tails, which taper toward the tip. Because they’re hunting dogs, people often chose to dock their pointers.

However, docking dogs’ tails is now banned in many countries around the world. Despite the widespread belief that docking is beneficial, especially in working dogs, the scientific community doesn’t support this practice.

The German Shorthaired Pointer is a hunting breed by nature, and they’re used to living an active lifestyle in the great outdoors. Their protective instinct also makes them ideal guard dogs.

German Shorthaired Pointers are best suited to active owners or young families that can provide them with the active lifestyle they need. Otherwise, they tend to become restless, often leading to behavioral problems.

They’re not particularly dominant dogs, but they respond best to owners who naturally give off a certain air of authority. They’ll need consistent training and clear boundaries to keep them in check.

These dogs need to have a certain structure to their daily life. Without proper attention and discipline, Pointers can suffer separation anxiety and develop destructive habits.

As for possible health issues, this breed is prone to hip dysplasia, epilepsy, and certain types of cancer. Their life expectancy ranges from 12 to 15 years.

To prevent them from contracting parasites, it’s best to brush these dogs regularly, especially after long walks in the countryside. The presence of twigs and mud in their fur can allow parasites to flourish.

The right diet for German Shorthaired Pointers will depend on their level of activity. If they’re used as hunting dogs, then high-energy, high-protein pet foods will be the best option for your pet. Any change in diet should be done slowly to allow their digestive system to adapt.

The Legendary Italian Pointer
The Italian Pointer is one of the oldest breeds on the planet. They have a reputation for being both excellent company and hard workers. Read more »
Link copied!
Interesting Articles
Dogs
The Causes of Epilepsy in Beagles