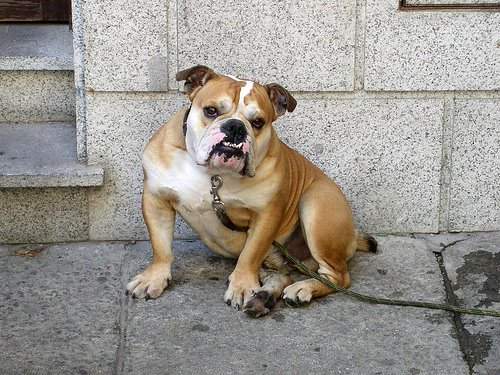 The Spanish Alano, popularly known as the “Spanish Bulldog“, is a fairly unknown breed in Spain. In fact, it’s a very old brred that’s considered to be potentially dangerous, like other dogs that have undeserved bad reputations, such as the Pit-bull or the Staffordshire Bull Terrier.

History of the Spanish Bulldog

Its name is inspired by the Alans, who arrived to Europe from the North Caucasus region during the 4th century A.D. They possessed a breed known as Alano, which is an ancestor of the Spanish Bulldog.
King Alfonso XI mentioned this breed in one of his Montería treaties that took place during the 15th century. This breed also appears in Velázquez paintings, and in the writings of Cervantes.
The Alans used this animal for combat, hunting and livestock. The Spanish army used this breed during the conquest of the Americans. Unfortunately, people even used these animals during bullfighting shows, forcing them to face groups of fierce bulls.
Its historical importance has not only been seen in works of art. There are also well-known Spanish Bulldogs throughout history. The best example is Becerrillo, Sancho of Aragon’s dog, that allegedly gave up his life to save his master.

King Alfonso XI mentioned this breed in one of his Montería treatises that took place during the 15th century. It also appears in Velázquez paintings, and in the writings of Cervantes.

This dog has a large head, a muscular jaw, and a strong build. It can weigh up to 40 kg. Its fur can have many different colors, such as gray and red stripes, with thick wrinkly skin.

The Spanish Bulldog’s behavior is similar to that of other hunting dogs. It’s a restless animal that needs long walks and to be active constantly. It’s a complicated dog to manage, and difficult to train, but it’s very faithful.

Historically, it is known for its great bravery, which is why it was used to hunt the most dangerous species, such as the wild boar, which is capable of killing these dogs effortlessly.

The Spanish Bulldog’s behavior is similar to that of other hunting dogs. It’s a restless animal that needs long walks and to be active constantly.

As mentioned above, this breed needs to be active. You should walk this animal at least three times a day. Although it has short fur, you should brush it at least once a week and keep its ears, eyes and mouth clean. Pay special attention to the folds on its face, because they can be a good place for dermatitis.

Due to this dog’s rustic character and the scarce selection of mates, this breed does not usually have many diseases. Make sure these dogs east a balanced diet to prevent them from becoming obese.
Obviously, like any pet, it’s important to take this dog to the vet to make a vaccination schedule because it can be infected with common diseases from other dogs.
The Spanish Bulldog can sleep outside because it is resistant to temperature change. However, be careful during the summer months. Make sure the animal drinks plenty of water.

In addition to its role as a combat dog and its participation in bullfights, this breed currently has other occupations.  Among them, it stands out as a large game hunting dog. Likewise, this breed can help with managing livestock, especially Bravo cattle, like the Spanish Fighting Bull.
The Spanish Bulldog breed was nearly doomed to extinction due to new hunting and cattle herding methods that left it jobless. Fortunately, this breed is making a comeback due to farmers successfully breeding them in the valley of Mena. Now, this historical breed has a second chance to demonstrate how it can benefit society.
Main image source courtesy of: www.ecured.cu
Link copied!
Interesting Articles
Dogs
Take a Look at These Breeds of Dog with Big Eyes!