The Azawakh dog breed comes from Africa. Not many people know about it, but they're fast and bold dogs. Keep reading to learn more. 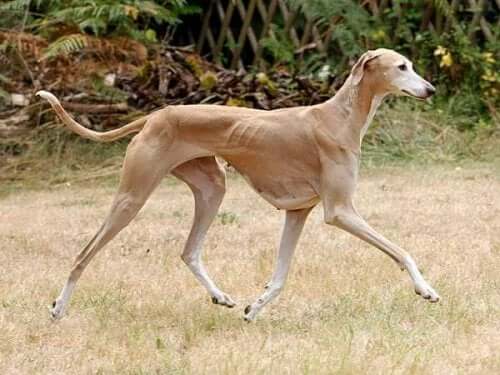 Today, we’re going to talk about a very peculiar breed that you might not know about because it comes from distant lands. We’re talking about the Azawakh dog breed, a fast and bold dog you’ll love to learn about. Keep reading!

Its history goes back to very ancient times. In fact, they were raised by an African nomadic tribe from Mali in the south Sahara desert. Obviously, to have one of these dogs, you had to get him out of the tribe, which was impossible.

However, by 1970, a Yugoslav doctor managed to get one by doing some chores for the tribe. First, she took a male. Then, the defended the tribe by killing an elephant, so they gave her a female.

Soon, this doctor began to breed these dogs, and they spread to Europe and the United States. It was a very valuable dog due to its speed. Also, they were great hunters. In addition, the tribe used them in races for sport.

Characteristics of the Azawakh dog breed

Their heads are long and thin, but very sculpted with a flat skull. Also, their eyes are almond-shaped and dark or amber. Their muzzles are long, narrow, and straight and tapering outward, but not pointed. Their noses are always black or chocolate with very open nostrils. As for their ears, they’re located at the top of the head, are flat and droopy, but very thin.

Their bodies are long, with very long and thin extremities. However, they’re firm and muscular. Also, their tails are narrow, and gets thinner towards the tip, as well as dropping slightly.

Their coats are short and fine, making them soft to the touch and very easy to maintain. Usually, their colors are fawn, brindle, and ranges from ridges to dark fawn. However, their chest, tip of the tail and hind legs should have white spots.

The Azawakh dog breed is very loyal, attentive, and affectionate with family members. On the other hand, they’re very distant and reserved with strangers. They have a strong territorial and protective instinct, making them great watchdogs.

In addition, they’re great with children because they’re very affectionate and patient. However, they don’t get along well with other pets that aren’t dogs. Usually, if they’re raised with other dogs, there’s no problem.

Make sure to use positive reinforcement while training, as this breed doesn’t respond well to the traditional method. They’re great family dogs, but need lots of space because of their size.

Azawakh dogs don’t need special care, except for daily exercise, although they don’t do well in the cold. In fact, their physical and emotional health will suffer. Also, they have a tendency to gastric torsion and epilepsy, although you can’t really do much for this. In addition, you only need to brush their hair once a week to remove dead hair.

This is all you need to know about the Azawakh dog breed, a very interesting African dog that we’ve loved talking about. Would you like one as a pet?

The Most Important African Dog Breeds
There's no denying that when we think about Africa, we tend to imagine all sorts of exotic animals. But there are actually a number of African dog breeds. Read more »
Link copied!
Interesting Articles
Dogs
The Puli: A Dreadlocked Dog from the Carpathians