The Bergamasco Shepherd Dog Breed of the Italian Alps

The Bergamasco Shepherd dog breed is very intelligent, active, observant, patient, tolerant, attentive, and caring. This "Rastafarian" animal is a great pet for families with children and other animals. What's more, it stands out for its great health. 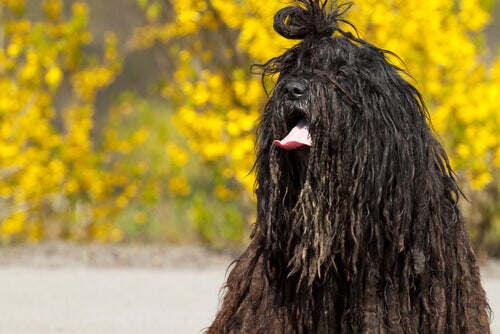 Several types of canines have dreadlocks, and the Bergamasco Shepherd dog breed is one of them. This dog comes from the Italian Alps and has a very particular appearance and personality. Stick around and find out more about this endearing animal.

All you want to know about the Bergamasco Shepherd dog breed

The history and origin of the Bergamasco

As we just mentioned, this dog breed comes from the Italian Alps and has been used for years as a herding dog. The idea of using dogs with dreadlocks as shepherd dogs emerged with wolves and other predators confusing them for sheep. That way, when the predators attacked them, they encountered quite a surprise. What’s more, the Bergamasco’s abundant fur protects it from bites.

Interestingly, unlike other breeds, the origin of this dog is unknown. There are no historical documents that mention the Bergamasco Shepherd breed. Nor are their records to reveal how long this breed has been around.

Just the same, perhaps thanks to its appearance, or maybe its friendly nature (typical of Italians), this dog has spread all over Europe. In fact, several specimens also exist in America.

So, if we’re going to talk about the appearance of the Bergamasco Shepherd dog breed, the first characteristic to stand out is its hair. It’s one of the most characteristic dreadlock breeds, although many confuse it with the Komondor, a similar breed from Hungary. Their felted hair is a feature that develops and grows naturally when cut or brushed.

The texture of these dreadlocks is rough and comes in different shades of grey with spots of the same color. On occasion, Bergamascos may also have shadings of Isabella and fawn at the ends of their locks, but never at the base. They aren’t allowed to have any white hair whatsoever, whether solid or in combination with other tones.

The height of these animals varies between 23.5 inches in males and 22 inches in females. Weight in males is between 70 and 84 pounds and between 57 to 71 pounds in females. Despite their size, there are many who consider them to be a medium-sized breed. Perhaps because their fur causes them to appear much larger than they are.

Their fur is abundant over their entire bodies, including their ears and feet. In fact, there’s no part of the body that has less fur. What’s more, they have a harmonious shape, with a deep chest and a strong appearance.

The length of the Bergamasco’s snout is the same as the dimension of its cranium. This causes the head to have a larger appearance, although it’s actually proportionate to the rest of the body.

The nature and temperament of the Bergamasco Shepherd dog breed

Like all dogs that have worked as shepherds, the Bergamasco is very intelligent, observant, patient, and attentive. These qualities, along with the fact that Bergamascos are so versatile, make them the perfect companion for small children.

Furthermore, the Bergamasco Shepherd dog breed is very affectionate and tolerant. Therefore, it’ll put up with just about anything from children. However, despite their affable character, it’s important to socialize these dogs from the time they’re puppies. Doing so prevents typical alpha male behaviors and guarantees that they’ll be friendly with children, adults, and other dogs.

One of the main needs that you’ll need to satisfy when it comes to this breed is exercise. Bergamascos are very active animals that need to burn off energy as well as strengthen their bones and muscles. Going for a daily walk or even a run should be part of your pet’s routine.

Just because the Bergamasco’s hair has dreadlocks doesn’t mean you shouldn’t wash it. However, what you should avoid is combing it. Rather, simply apply a good quality shampoo and a good conditioner to keep the locks from becoming intertwined. At the same time, this will help promote shine and a clean appearance.

Furthermore, the Bergamasco is a strong dog that doesn’t require a great deal of care. That being said, we recommend carefully examining its fur to look for parasites or fleas. These tiny creatures can easily get tangled in your dog’s fur and go unnoticed without regular inspection.

So, if you’re looking for a caring and loyal dog to take care of your family, then the Bergamasco might be just what you need.

The Legendary Italian Pointer
The Italian Pointer is one of the oldest breeds on the planet. They have a reputation for being both excellent company and hard workers. Read more »
Link copied!
Interesting Articles
Dogs
The Puli: A Dreadlocked Dog from the Carpathians