The Caucasian Shepherd - A Giant Among Dogs

The Caucasian Shepherd is a particularly robust dog, weighing in at around 200 lb, and has a particularly protective character, which serves it well in its role - guarding livestock from wolves. 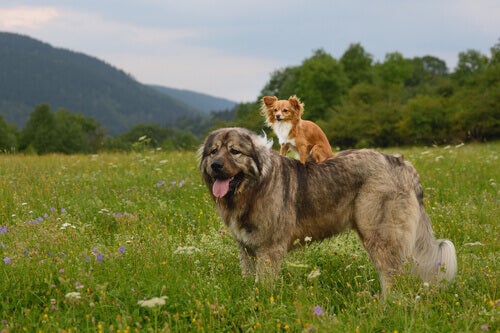 The Caucasian Shepherd is one of the biggest dogs you can find. But, as well as being huge, they also have a very distinctive coat to keep it warm in the cold weather, which makes it look even bigger! Read on to find out more about these enormous dogs.

The history of the Caucasian Shepherd

As its name suggests, the Caucasian Shepherd originally comes from the Caucasus Mountains, situated between Russia, Armenia, and Azerbaijan. Records suggest that this breed has been around for a long time, with the first record of them dating from the 2nd century BC.

However, despite being around for so long, it’s only relatively recently that they’ve been appreciated and recognized officially. It was only in the 1930s that they began to be accepted in competitions and shows.

The origins of this breed are quite clear: their temperament and physique are closely linked to their function – protecting livestock from wolves in the mountains. Their large size helps them to herd the animals and also ward off predators.

At the same time, their fur and body fat helps protect them from the weather. Their fluffy fur creates pockets of air that insulate against both the cold and the heat.

Their character has developed in accordance with their role, and throughout the centuries they’ve been select to survive in the mountains, protect the livestock, and make the right decisions to repel any wolf attacks.

Characteristics of the Caucasian Shepherd

The Caucasian Shepherd is a very big and well-proportioned species. Beneath their fur, this is a muscular dog with strong bones and great strength. There is a great sexual dimorphism in the breed too, with the males being larger than the females.

Both breeds tend to be a minimum of 2 feet tall, although the males can reach two and a half feet with the females maximum height being a few inches shorter.

The biggest difference however is in their weight. The males can weigh over 150 lb, some even reach 200 lb, whilst the females don’t tend to weigh much more than 110 lb.

They have a large, solid head and snout. Traditionally, they had their ears cut, but this practice has been banned in recent years. Their natural ears are triangular and hang either side of their head.

There are three different varieties of fur: long, short, and medium length. But, in all cases, their fur is smooth and dense. They have a sub-layer of woolly fur that is lighter in color which helps to protect them from extreme temperatures.

They come in many different colors, either a solid color or with patches, but they’re not considered a pedigree if they’re black. However, the most preferred colors are gray or brown.

Their behavior is not quite what you’d expect considering its bear-like appearance. They’re very determined and know what they want, but they also make a great guard dog or family pet.

They’re tenacious, intelligent animals, and they’re more independent than other shepherd dogs. All of this makes them very difficult to train, so positive reinforcement is a key tool for the best results, incorporating play into their training.

They’re very wary of strangers and tend to be a bit of a bully when it comes to other dogs’ toys. They need to be supervised in the park and when playing as they can easily get into an argument with another dog.

They’re energetic dogs, so they need exercise. However, they will enjoy a long walk just as much as chasing a ball in the park. But they’re not really suited to living in the city.

Caring for a Caucasian Shepherd

Caucasian Shepherds are generally healthy animals and don’t suffer from hereditary illnesses. However, they do suffer from problems that are common in large dogs.

It’s very common for large dogs to suffer from hip and elbow dysplasia, as well as heart problems. Ideally, you should take them to a vet when they’re young to identify any potential problems and try to prevent them from getting worse.

Just like any other dog, it’s important to keep them up to date with their vaccinations and anti-worming treatments. This is especially true when it comes to their coat because it’s so thick that it makes parasites difficult to spot.

Speaking of their fur, they need regular brushing – ideally twice a week. This will help avoid knots and tangles that could cause them pain and discomfort. Since they have a sub-layer of woolly fur, cutting their fur is bad because it will remove their natural insulation.

The Caucasian Shepherd is a colossal worker, and although they’re not that friendly, they’re certainly brave and have a better temperament than smaller dogs. They’re determined and tenacious but independent animals.

The Mastiff’s Guardian Instinct
A guardian instinct is one of the most important characteristics for dogs that protect livestock, particularly mastiffs. Mastiffs are ideal for this role. Read more »
Link copied!
Interesting Articles
Dogs
Gordon Setter: The Most Beautiful Pointing Dog