Even-tempered and with a pleasant disposition, the Hamilton Hound is a canine hunting dog that only the most privileged classes of the 18th century were allowed to enjoy. 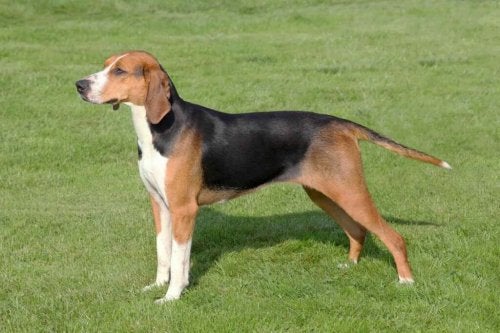 The Hamilton Hound is a strong animal with good proportions and is a popular Swedish hunting dog. Its balanced temperament and pleasant disposition are two of its most valued characteristics.

The origins of the Hamilton Hound

In 1789, people considered the Hamilton Hound to be a privilege that only the most powerful classes could enjoy. Until the 18th century, commoners weren’t allowed to have hounds. It was after that time that various mixed breeds began to appear in countries like Switzerland and Germany.

The origin of the Hamilton Hound–or its name in German, the Hamiltonstövare–goes back to dog shows that took place in Sweden in 1886. Duke Adolf Patrik Hamilton had a couple of these animals that are considered the “parents” of the breed.

However, the standard of this breed didn’t appear until 1921, the same year it got its name Hamiltonstövare. Prior to this, people knew the dog as the Swedish Foxhound.

This breed was a beloved animal among popular culture in Sweden. After all, a story exists in which an elf, along with a Hamiltonstövare by the name of Karo, helped housewives carry out their work.

The characteristics and morphology of the Hamilton Hound

With a rectangular appearance and well-proportioned dimensions, the Hamilton Hound finds itself among the group 6 breeds of the International Cynological Federation.

The Hamilton Hound has a long head and tri-colored spots all over its body. As for their size, they range between 21 and 24 inches in height in males. The ideal size for breeders is 22.5 inches. As for females, they range between 19 and 22 inches, approximately.

This animal, as we’ve stated, has a tricolor coat that’s short and smooth, especially in the area around the ears and head. At the same time, the hair on the back of the dog’s thighs and under the tail is harder. The most common colors are white, rust, and black.

Like any hunting dog, the Hamilton Hound needs more than two walks per day in order to burn off all its energy. Experts recommend a minimum of one hour of intense physical exercise per day. This should take place in a safe and spacious area where the dog can fun freely without having to be on a leash.

Without adequate exercise, these animals can acquire destructive behaviors. This is typical in animals who can’t move around as much as they should. As for the care of their coats, Hamilton Hounds have a double layer, meaning they require weekly brushing.

However, the Hamilton Hound is a strong breed without any type of associated hereditary illnesses. The main concern of owners should be assuring proper exercise and training to keep their dogs active. And, of course, making sure their diet contains the main nutrient groups.

Some keys regarding the training of hunting dogs

To conclude, here are some of the key points for training hunting dogs that may be especially useful for future owners of Hamilton Hounds.