Group 6 Dogs: Breed Classification According to the FCI

In this very interesting article, discover the group 6 dogs according to the FCI classification. Read on to learn more about them! 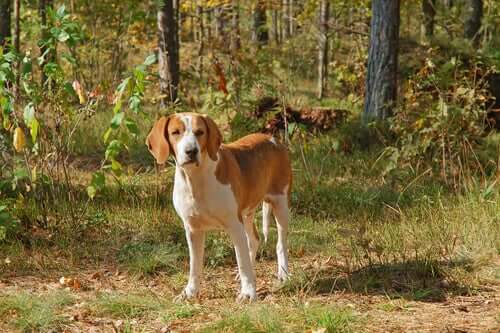 The Fédération Cynologique Internationale (FCI) –  World Canine Organization in English – is responsible for determining the standards of each dog breed and classifies them into groups according to their characteristics. In this article, we’re going to discuss the group 6 dogs, which include hounds and breeds related to scenthounds.

Arguably, this is one of the sections that includes the most breeds (a total of 63). We decided to highlight the following:

This breed descended from the Bloodhound and the now extinct Talbot. It was created to accompany men who went hunting on horseback. It can work tirelessly for several hours and adapts to all types of terrain. This dog isn’t ideal as a pet, as it likes living in packs. As for its appearance, it’s similar to the Beagle, but larger. The coat is short and can be black, white, and tan. It has low, droopy ears and holds its tail straight up above its body.

This dog originated in the north of the Iberian Peninsula with the purpose of hunting all kinds of animals, including foxes, deer, wolves, and bears. It was described for the first time in the middle of the fourteenth century in a book called The Hunting Book of Alfonso XI. This dog breed is of medium height and has long, stretched out ears, and a smooth, short, and fine coat. The Sabueso Español is affectionate, gentle, strong, and noble.

This is a short dog that suffers from a genetic condition called osteochondrodysplasia. It has a long body. This dog is similar to the Dachshund and came from the crossing of a Blood Hound with another English dog. The first specimens were born in France and were used as trackers.

The coat is usually of three colors (white, brown, and black). It has very long ears that sometimes touch the floor and its movements are slow but not clumsy. It’s a quiet, friendly, loyal, affectionate, and somewhat stubborn dog.

This hunting dog from France is very versatile because it acts both individually and in packs. Its coat is thick and mottled, and it has a medium body, a slightly curved tail, and black spots on the sides of its head.

This is one of the most popular dogs in the world, and originated in the United Kingdom. It’s trained to track hares and rabbits and has a great sense of smell. It’s also used to detect all kinds of substances.

It became famous in Elizabethan times, in part due to movies and television. It has a gentle, cheerful, affectionate, intelligent, determined, and resolute temperament. However, the Beagle can be easily distracted when it detects a strange smell.

This section is composed of three breeds:

The two breeds that make up this section are:

Everyone recognizes a Dalmatian when they see one, due to its white body with black spots (a pattern not seen in any other dog). It owes its name to its place of origin – Dalmatia, Croatia. When specimens of this breed are born, they don’t have spots. These start appearing little by little.

This dog breed is prone to deafness (in that case, they have light eyes). It needs a lot of daily activity and exercise. The Dalmatian is energetic, playful, gets along well with children, is quite intelligent, and often reserved and independent.

This South African dog breed is large, muscular, and fast, as it can run up to 40 miles per hour (65 km per hour). People use it for guarding, hunting, and company. Also, it has a short and thick coat and a sort of “ridge” on its spine formed by hair that grows in the opposite direction to the rest (hence its name).

In addition, the Rhodesian Ridgeback as we know it today is a combination of other European breeds, such as the Bulldog, the Collie, the Pointer, and the Great Dane. This dog is also very loyal, intelligent, reserved with strangers, of stable temperament, protective, and patient with children.

Dogs in FCI Group 4: The Dachshunds
In this article, we'll tell you a bit about which dogs belong in group 4: the Dachshunds.  Read more »
Link copied!
Interesting Articles
Dogs
The Causes of Epilepsy in Beagles