The Irish soft coated wheaten terrier makes for a perfect family pet and an excellent competitor in dog shows. Read more about this loyal dog breed. 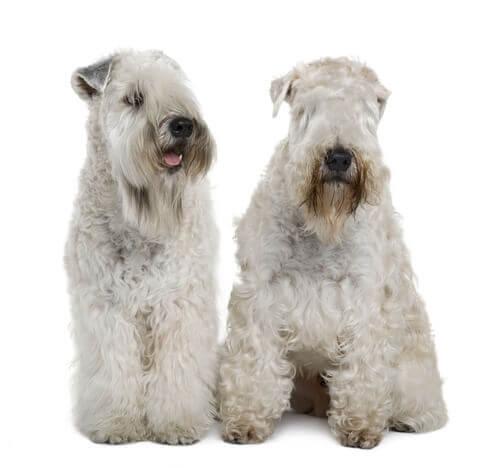 The Irish Soft Coated Wheaten Terrier is a dog of Irish origin that belongs to the terrier family. It’s medium in size, and highly intelligent. What’s more, it makes for an excellent companion, adapting rather easily to any family and home.

The origin of the Irish Soft Coated Wheaten Terrier

The history of Irish Soft Coated Wheaten Terrier (Wheaten from now on) intermingles somewhat with that of other Irish terriers. However, we can venture to say that the Wheaton is likely to be the oldest of the four breeds.

We can trace the origins of this breed back to the 19th century, as there are numerous textual references to “soft coated” dogs. Their origin is linked to the deliberate search for an animal with specific characteristics, especially in regard to its fur.

Despite this dog’s long history, it wasn’t until 1937 that the Wheaten received official recognition from the Irish Kennel Club. Since then, this breed has grown in popularity and has a good reputation around the world today.

In general, we can say that the Wheaten is a dog with a robust and solid appearance. It’s not very long, nor is it excessively short. This breed possesses powerful muscles, but its movements are agile and noble.

The International Cynological Federation published official breed standards in April of 2001. According to these standards, males should measure be between 18 and 19 inches at their withers. As for females, the standards don’t establish a specific height, but it should be less than that of males. When it comes to weight, it should be between 40 and 45 pounds, with bitches weighing somewhat less.

This breed’s coat consists of a single layer of uniform hair, so there’s no double layer. Its fur has a soft and silky texture, as you can guess from its name. As for coloring, the animal’s coat should be uniform and wheaten-colored. Shades can vary from light-wheaten to a golden-reddish hue.

In the context of competition, the federation allows for some trimming or preparation according to concrete parameters. The animal’s hair should be short at the neck, chest, and cranium. At the same time, it should remain especially long at the eyes and below the jaw. Long fringes on the extremities are recommended, as well as a mustache that decorates the canine’s snout.

However, if owners choose to leave the Wheaten’s hair long, then the fur shouldn’t exceed 5 inches in length at its longest point. What’s more, the dog’s hair should be abundant and soft, wavy or with loose curls, and very shiny.

The nature and behavior of the Irish Soft Coated Wheaten terrier

Like the majority of medium and small-sized terriers, the Wheaten is a very active dog. In the same way, it’s a courageous animal, without being reckless. Wheatens are very noble and loyal with their owners and families and display a good temperament.

At the same time, the Wheaten is intelligent and obedient, meaning that training these animals is quite simple. They have a positive attitude toward children and love to play fetch. And, by the way, this means of physical exercise is very favorable to their health. At the same time, it’s a good way to “tire them out” before going indoors.

Caring for the Wheaten

As you’ve probably guessed by now, one of the points that require the most care in this breed is its hair. Owners should brush their pet’s coat on a weekly basis. What’s more, taking these Wheaten terriers to a dog groomer is advisable in order to reduce the hair around the face. If the dog will be competing, professional grooming is even more important.

As for the health of the Wheaten, there are no known illnesses that are especially prominent. However, it’s true that this breed may suffer from joint problems like elbow or hip dysplasia. They can also suffer from other more serious conditions, like gastric torsion.

In any case, proper nutrition, physical exercise and regular visits to the vet will keep our Wheaten terriers happy and healthy. And, at the same time, these dogs will fill our homes with energy.