The Sad Story of The World's Most Expensive Dog

This herding dog breed has been glamorized due to Aristotle's and Marco Polo's words, which is the reason why people make big profits off of them. However, because it wasn't a commonly sold dog, prices fell and many were abandoned. 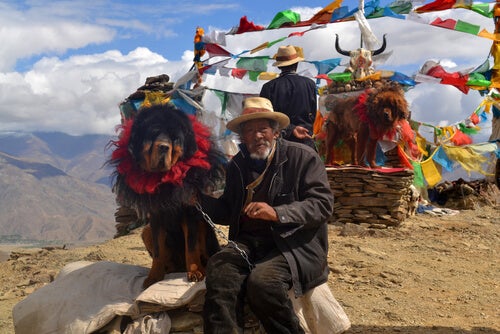 Years ago, a certain breed won the title of the most expensive dog in the world. It was the Tibetan Mastiff, an enormous furry dog that was used to guard livestock in the Himalayas for centuries.

From Humble Origins to The Most Expensive Dog in The World

The most expensive dog in the world actually came from pretty humble origins. For millennia, they guarded monasteries and accompanied shepherds in the region of Tibet. Aristotle mentioned once spoke about them, and Marco Polo was very impressed and taken by the Tibetan dog’s beauty. This breed stood out for its almost mythical grandeur and impressiveness.

Most likely this legendary spotlight caused this mastiff to become the most expensive dog in the world, which is still bred in thousands of places worldwide, from the Pyrenean Mastiff to the Neapolitan Mastiff.

It’s powerful bark and its lion-like appearance is why people have paid great sums of money to have them in their mansions and palaces, especially in upper-class Europe.

Unsuited for a Luxurious Life

Creating a breed is a complicated task. You need to select traits and bloodlines to find these traits. Often, they’re purely aesthetic traits, but others are more for utility, such as with working dogs like the Tibetan Mastiff.

People didn’t just select them for their looks. The Tibetan Mastiff has been used for millennia to protect livestock in the icy Himalayan mountains due to their strength and active guardian instinct that’s written in their DNA.

As a result, this breed is most comfortable in cold climates and wide-open spaces. They’re working dogs, particularly for protecting livestock from predators like the snow leopard and thieves. It’s perhaps this is why these dogs are not a good option for a first pet nor for people who can’t provide them with a good amount of physical activity. However, they can still make great pets.

Sadly, these traits mean that they don’t suit everyone. This, plus the exaggerated status of the breed, along with touched up images in order to show these beautiful mastiffs as almost magical, caused their prices to skyrocket. Therefore, hundreds of breeders could no longer make a profit simply abandoned their dogs.

The once most expensive dog in the world is now on hundreds of streets in China. In many cases, people have abandoned them in dog slaughterhouses. Although the Chinese have just as much right to eat dogs as we eat rabbits or cows, they are still greatly criticized for the cruelty and terrible conditions in the slaughterhouses.

This probably illustrates the dangers of intensive breeding and consumerism, which has resulted in the Tibetan Mastiff becoming nothing more than a decoration. The commercialization of a dog which has accompanied humans for millennia in one of the toughest environments on earth is now a victim of transhumance.

The Tibetan mastiff has since become an example of how difficult and complicated it is to have a pet. It’s something that requires careful thought without falling into the consumerism trap. Remember, these animals are living creatures with real feelings who have been man’s best friend since prehistoric times.

Although hundreds of Tibetan mastiffs still live in Tibet, they continue to protect people and livestock, far from the problems caused by the greed of humans.