East Siberian Laikas are hunting dogs from Russia. They're resistant to low temperatures, and have an active and balanced personality. 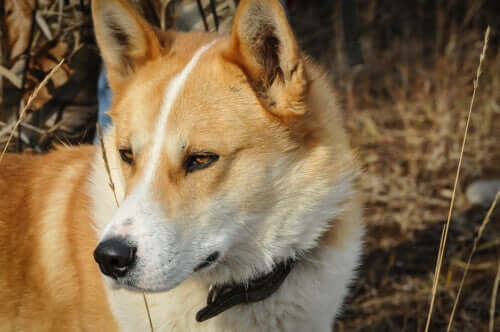 East Siberian Laikas are medium-sized dogs with a lively character that will win you over. Even though they’re bred for hunting, they’re very special dogs.

The origin of East Siberian Laikas

East Siberian Laikas are a breed of hunting dog native to Russia. Specifically, they’re from the Ural area, as well as wooded areas in eastern and western Siberia.

In the early 20th century, Russian cynologists bred the first Vogul (Mansi) and Ostyak (Khanty). In 1947, they proposed the breed Laika  – combining Khanty and Mansi into one breed.

Nowadays, East Siberian Laikas are the most common hunting dogs in Russia. Although it became popular throughout the country, they’re still especially popular within their native area.

The appearance of East Siberian Laikas

The breed standard for the East Siberian Laika was approved in 1952. However, it was most recently revised in 2010. According to this standard, they’re medium-large dogs with a strong and well-defined structure.

This breed has clear sexual dimorphism. In other words, it means the males are bigger than females, with different muscular development. Males are between 21.6-24.4 inches, and females are between 20-22.8 inches. According to the World Canine Association, these proportions are also very important:

East Siberian Laikas’ heads should be thin, wedge-shaped and proportionate. Their shape is similar to an equilateral triangle, as seen above. The top of the head is moderately wide. Females have smaller heads than males.

Their fur has two layers. The outer layer is thick, hard, and straight. On the other hand, the inner layer is soft, abundant and downy. On their head and ears, they have short and thick hair. However, on their shoulders and neck, the hair is longer.

They’re great hunters, so it’s not a good idea to have other pets like cats or rabbits. Self-assured, they’re very faithful to the owner and the pack. However, they’re alert and intimidating to strangers.

Coming from the coldest region of Eurasia, it’s normal for this breed to adapt well to low temperatures. Their double coat protects them from cold and humidity, and it’s important to take care of it. We recommend brushing it at least once a week. Also, don’t bathe them too much so you don’t damage their weather-resistant fur.

It’s a resistant breed that doesn’t have many specific diseases. However, since they’re large dogs, monitor their joints to avoid problems like hip dysplasia. In addition, you’ll want to watch for severe problems like stomach torsion or heart disease.

In short, East Siberian Laikas are resistant dogs that need physical activity and a good, balanced diet. If you follow these simple steps, you’ll have a lively, healthy and happy pet.

Animals that Adapted to Extreme Cold
For some animals, low temperatures and snow are part of their normal lives. Up next, we'll tell you all about animals that adapted to extreme cold weather. Read more »
Link copied!
Interesting Articles
Dogs
Pug Dog Breed, the Best Dog for You