The Somali cat has a great personality. It's patient and not at all possessive. It's the ideal playmate for children, and even for other pets. 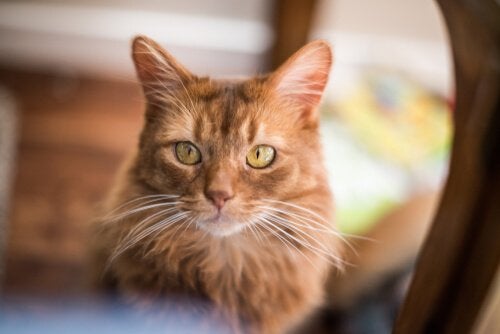 The Somali cat is one of the prettiest cats out there. In addition, it’s one of those breeds that’s really easy to differentiate from the others. Would you like to know a little more? Well, today we’re going to tell you all about this lovely cat, so that you can decide whether it might be the right pet for you.

All about the Somali cat

Upon hearing its name, we may not be able to avoid thinking about Somalia. But, curiously, the name of this cat has nothing to do with the country. In fact, the cat originated in the United States and Canada.

Although many know this cat as an Abyssinian in some parts of these countries, the latter is actually a different breed. Its characteristics are very specific.

For example, the coat of the Somali cat is longer and tougher and, although they are definitely related to the Abyssinians, they weren’t considered pure and so they couldn’t belong to the litter. They were put to one side until someone realized that they really were beautiful specimens, and a new breed could be “created”.

The hair is undoubtedly this cat’s most striking feature, and it’s believed to be the result of the mixture of Abyssinian and Persian cat breeds –this is an unconfirmed fact, however. The breed was recognized in 1978 by the Fédération Cynologique Internationale (FCI), but other associations didn’t do so until four years later.

Characteristics of the Somali cat

The Somali cat is of medium length, but very flexible and muscular. It can weigh between eight and ten pounds, and its back has a somewhat arched shape. Its head is shaped like a wedge with round eyes, a snub nose, and pointed ears; these are wide at the base and narrow at the top.

Its eyes usually have an intense and uniform color that ranges from amber to green. There’s always a part on their belly that’s darker than the rest of their fur.

Its legs are long with narrow and oval feet. However, they’re firm and able to move in a way that displays their incredible flexibility. Its tail is hairy, long and has a wide base that narrows towards the tip.

The hair of the Somali cat is one of its most striking and attractive traits. It’s of medium length and very fine, but bright and silky at the same time. It’s impossible not to approach one without feeling compelled to touch it. This special coat runs all over the cat’s body, and many people compare its tail to that of a fox.

Acceptable colors for this breed to qualify as a Somali are chocolate brown, an intense bluish gray, cinnamon, black silver, chocolate silver, and silver fawn. They don’t have streaks, although they may have diffused hair spots in several areas of their body, particularly on the chest and the inside of their legs.

The Somali cat is very playful, sociable, active and athletic, and needs to exercise often. Activity should be part of the cat’s routine, so if you don’t have enough space for it to move at leisure then you’ll have to take it out and spend time playing with it.

This feline can’t exercise enough in small apartments with limited space. So, because of this, making sure you have the right type of space for it very important.

This feline is sweet, patient and not at all possessive, and these are ideal qualities for it to interact with children and with other pets.

The part of this cat that requires most care is, undoubtedly, its coat. It must be brushed every week, and daily during molting season. For the most part, it only requires the same care that other breeds need such as cleaning their eyes and ears, baths once in a while, and trips to the vet to keep up with their vaccinations and deworming schedule.

Do you think the Somali cat may be the perfect pet for you? Well, go for it!

How do Dogs Process Words and Commands?
A new study delves into the brain mechanisms that dogs use to differentiate and process words, and just what they understand from them. Read more »
Link copied!
Interesting Articles
Dogs
Pug Dog Breed, the Best Dog for You