The Briard: An Intelligent and Lively Breed

Today, we'll be taking a closer look at one of the most famous and popular herding dogs in the world: the Briard. 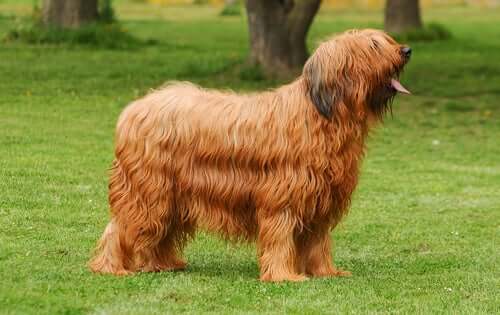 The Briard belongs to the European herding dog group. Originating from France, they’re a descendant of the livestock guardian dog.

The origin of the Briard

While there are several theories, most experts agree that the name Briard comes from the French region of Brie, located in the northeast of France. This is an area that’s famous for sheep farming.

The long-haired Briard became an official breed in 1855. However, it wasn’t until 1896 that breeders began to differentiate between the Briard and the Beauceron (also known as the French short-haired shepherd or the Berger de Beauce). Today, there are a number of different clubs and associations dedicated to this famous breed.

Generally speaking, the Briard has a rustic, muscular and well-proportioned build.

They have large, robust heads, and a pronounced stop (the indentation between the muzzle and the forehead), which is located equidistant from the back of their head, and the tip of their nose. Their paws are round and powerful, while their tails are covered in thick fur, and curl slightly upward.

Their whole body is covered in a dense coat, giving them a beard, mustache and eyebrows, which partially cover their eyes. As for their coat color, standard British regulations state the Briards can be pure black, fawn, gray or blue.

The Briard is a large breed. At the shoulders, males measure roughly 24 – 26 inches, while females usually measure between 22 and 25 inches on average. Their weight can easily exceed 65 lbs.

While Briards are relatively large dogs, they can be fairly boisterous, and need plenty of exercise. Experts recommend starting training from a young age, and attending training sessions on a regular basis. In terms of their temperament, these dogs are intelligent, lively and cheerful animals.

Because they were originally bred for herding sheep, Briards also make excellent guard dogs. They get on very well with children, but can be hostile toward strangers, despite their generally level-headed temperament.

Although no significant or recurrent health problems have been reported in this breed, it’s important to remember that larger dogs are generally at greater risk of developing problems such as gastric torsion and hip dysplasia.

There is also a certain risk of them developing eye problems such as pattern dystrophy of the retinal pigment epithelium and stationary night blindness. Proper care and regular veterinary check-ups are the best ways to keep your Briard strong and healthy.

As we’ve already mentioned, the Briard’s temperament means that they require plenty of exercise and proper training right from the start. With this in mind, it’s a good idea to take them out for long walks in the countryside as often as possible.

You may also want to adapt your home or yard to give them plenty of space to run around, and help them adjust to life in the family home.

One of the most important aspects to keep in mind when it comes to looking after these dogs is coat-care. These long-haired sheepdogs require brushing on an almost daily basis to keep it shiny and knot-free.

Like all dogs, Briards require a complete and balanced diet. Pet foods enriched with omega-3 are always a great option. They can help to prevent coronary diseases and keep their coat strong and shiny.

Remember, to avoid any issues and help your Briard adapt to its new home, it’s always best to consult with a trusted veterinarian.

Bouvier des Ardennes, a Scraggly and Gentle Dog
Bouvier des Ardennes is a dog that is sometimes confused with the Bouvier des Flanders. But, these are two different species. Read more »
Link copied!
Interesting Articles
Cats
What's the Origin of the Persian Cat?